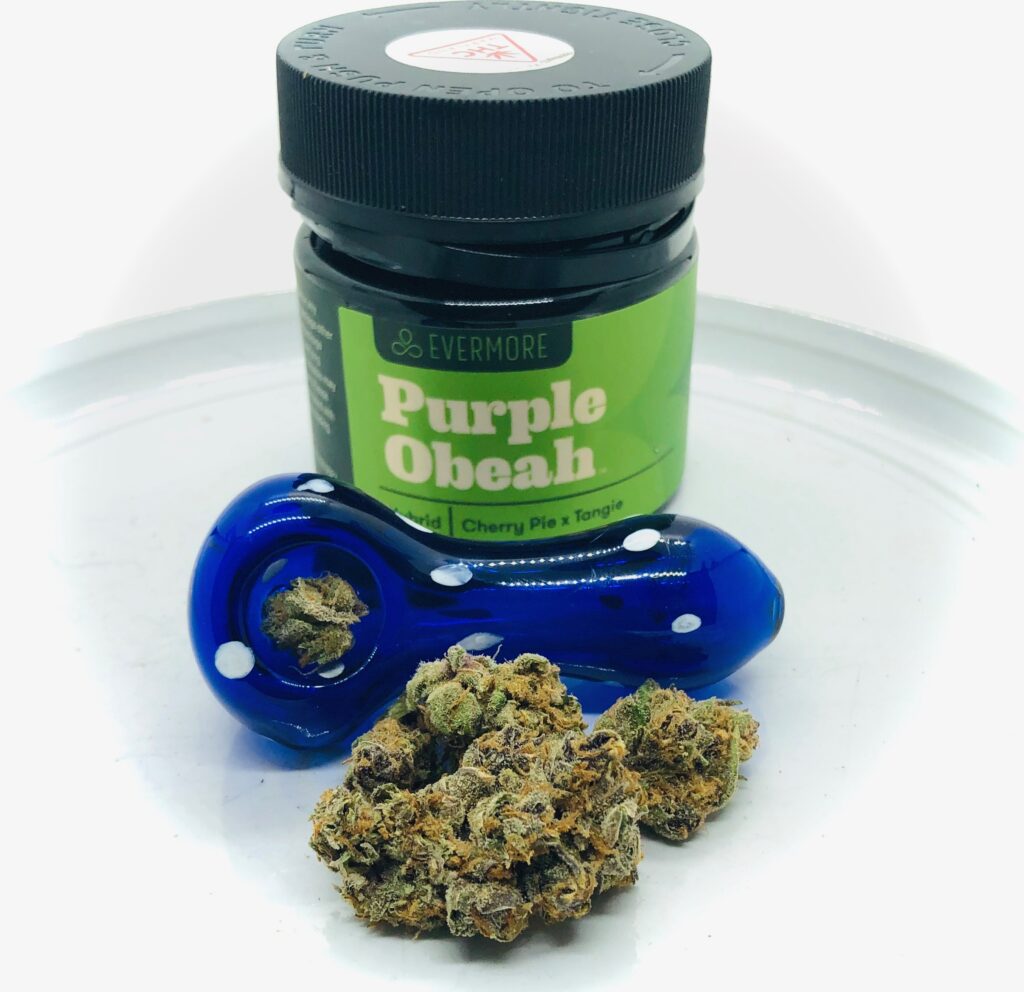 Cherry Pie=Durb 1 x GDP ( Grand Daddy Purple)
Durb 1 is a creation of camera -shy breeder Jigga who is known for his spiritual level commitment to the Cookies Family breeders he is part of and the cannabis they cultivate.
Most notably GSC, who itself is said, by Jigga to contain Durb 1 genes. “It’s called f1 durb because it got us high so fast” (pieguy420)
Source: https://en.seedfinder.eu/strain-info/F1_Durban/Unknown_or_Legendary/
CLICK HERE

Tangie=California x Skunk 1 (essentially a rendition of the once popular Tangerine Dream, which was widely distributed in the 1990s 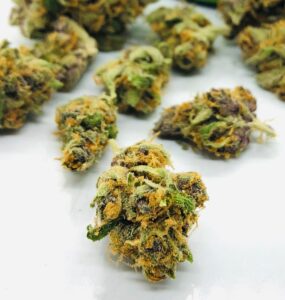 EFFECTS (MIND + BODY):
The most notable thing a Purple obeah was the level of focus and not just any kind of steady hazy mind locked focused that can really illuminate the rabbit holes and take you down a few.  very smooth insulated cotton-head type cerebral euphoria in radiant waves of increased intensity.
Very pleasurable. Almost invigorating and possibly arousing. 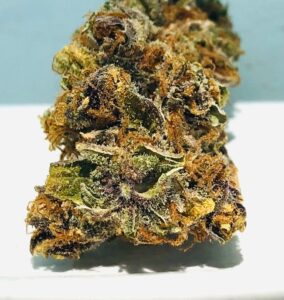 BODY;
*this perceived under-chin sensation seemed to only add to the altitude climbing cerebral uplift
considerable amount of cranial and facial pressure 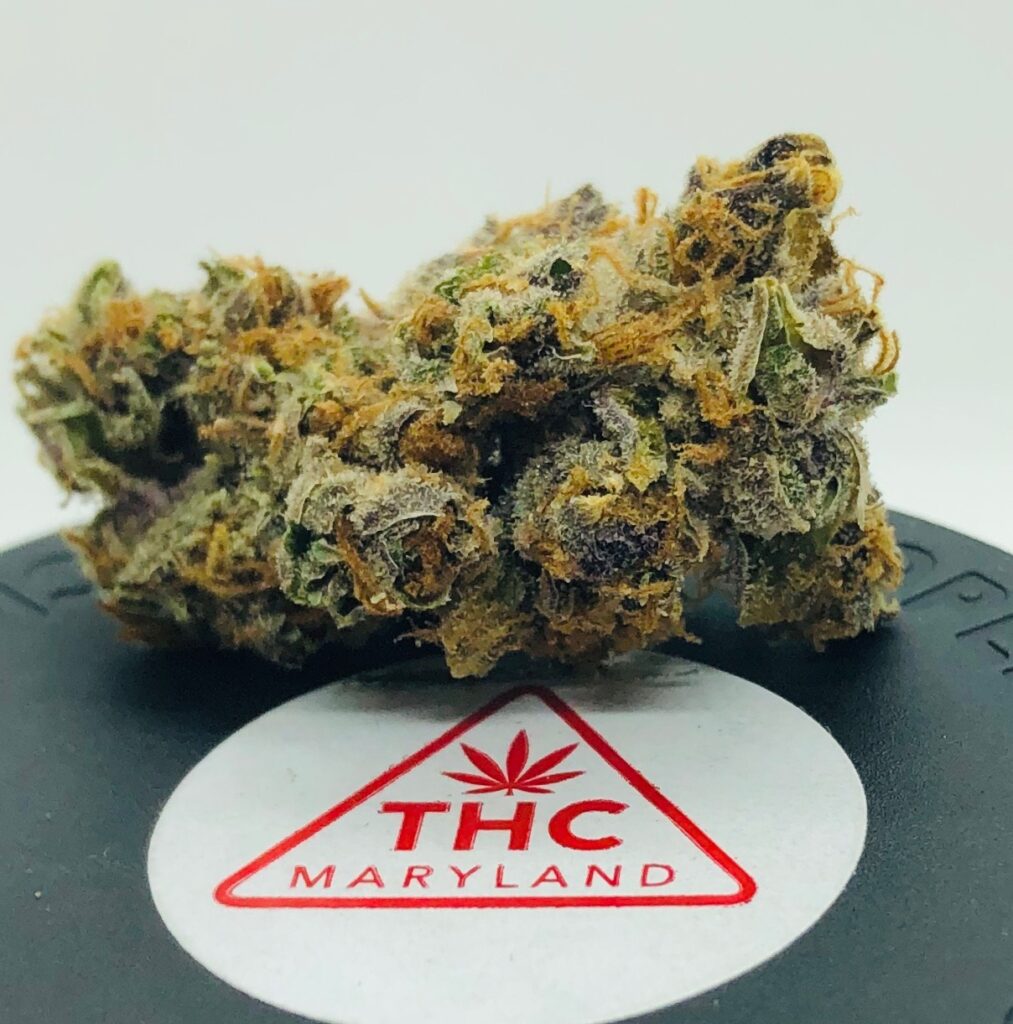 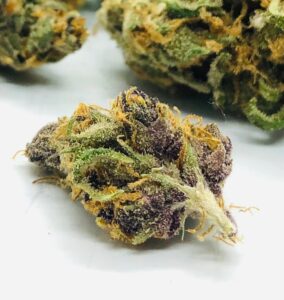 What can be said is that you will find a collection of colors reminding you of many purple cannabis you may have encountered in the past. Upon closer inspection and beyond the full-frontal pungent orange aroma, there lies an almost redundant amount of bright resinous pistils cascading in clumped formation along the green and purple leaf structure. Definitely a looker. 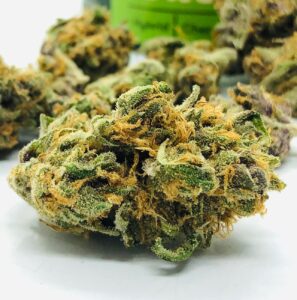 AROMA;  As stated before on Sunset Octane:
Very robustly fragrant with hints of orange and pepper.
And, overall as usual for Evermore, who seem to hold the secret for curing the most aromatic flower in Maryland, depending on strain and batch of course. I bet they could coax an aroma from The White if they tried. 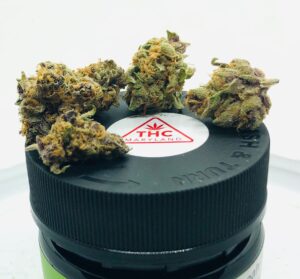 TASTE;  A little more harsh than one would expect given the aforementioned aromatics. 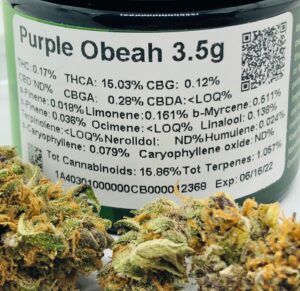 Patients with an inability to sleep will appreciate Obeah’s unparalleled ability to induce sedation and sleep.
Patients dealing with diminished appetite, lack of sleep, chronic stress, chronic pain, depression, anxiety, PTSD, and generally poor mood may find Purple Obeah to be quite medicinal.
**Also, because of its tendency to hone attention and sharpen focus combined with its sedative properties makes Purple Obeah almost ideal for those dealing with a lack of concentration or who suffer with attention deficit disorder ADD/ ADHD. 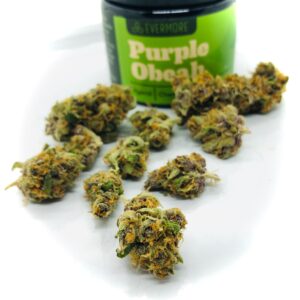 CONCLUSION:
Purple Obeah, by Evermore, is This Maryland favorite projects an earthy-sweet and musky scent from its Cherry Pie parent mixed with the spikey and pungent aroma of over-ripened orange and orange peels, mango, tangerine, and a note of pine courtesy of its Tangie side.
Purple Obeah’s potency is just as notable as its aroma and optics, and even in the mid-teens and twenties THC percentage range, its effects, especially the cerebral can be quite intense.
Obeah’s high begins with an instantaneous influx of uplifting cerebral energy elevating your state of mind in inspired focused thought. Purple Obeah’s effects seem to create a space where the mind can feel free to roam and hone in on whatever may grab your attention.

Its physical effects are soon to follow beginning with a warm cottony sensation that washes over the body rinsing away any residual stress that may linger while seamlessly ushering in Purple Obeah’s more notorious sedative powers gently leading the body and mind into an almost zombied state of stoney euphoria which inevitably leads to sedation and restful, even restorative sleep.

Purple Obeah’s ability to facilitate this state of frozen and focused state of mind, which can, in micro doses sharpen focus and be quite productive, can also provide a high level concentration for those dealing with ADD/ADHD or otherwise require some distraction from pain or the ability to perceive pain at different levels or layers, thus weakening its dominance. 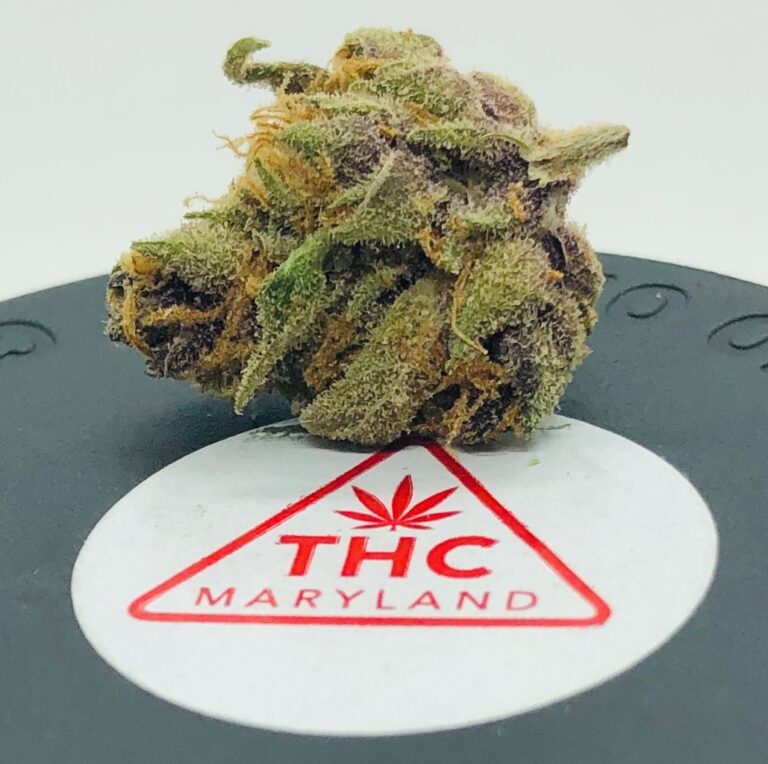 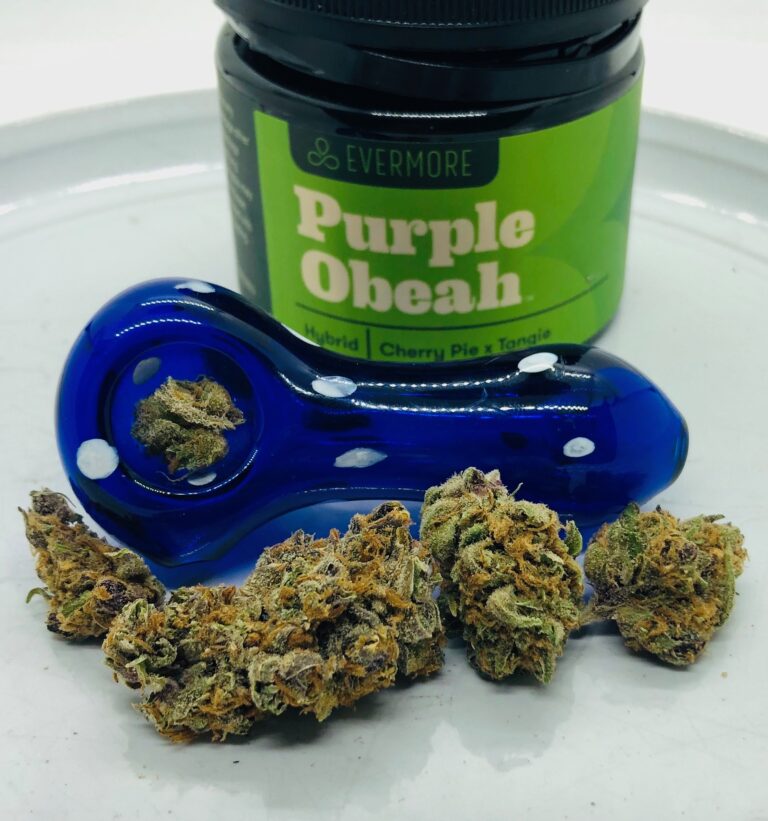 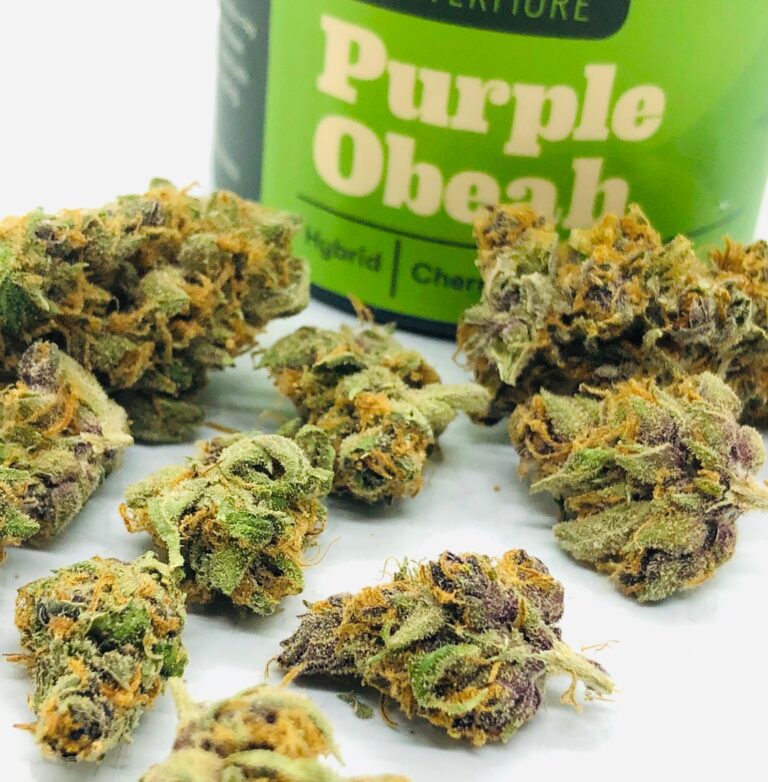 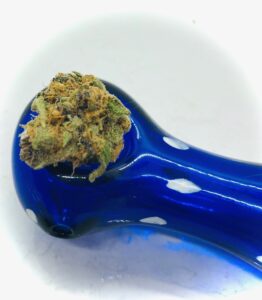 THE LONG WAY HOME (my toke…)
Purple Obeah is a popular Maryland flower that I’ve wanted to try for some time it but doesn’t seem to come around near me that often…When I did finally purchase it I was reluctant to give into the hype of its potency which is heralded as being independent of any correlation to its tested potency. 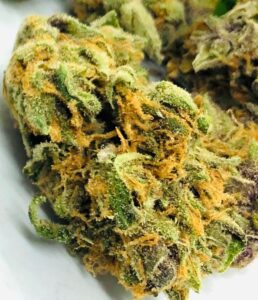 Purple Obeah is possibly now my most favorite chemovars by Evermore…and one that I’d like to keep on hand ..this coming from my previous experiences being a little hit and miss with some of their flower …fragrant and great on optics but a little less potent than I would like. 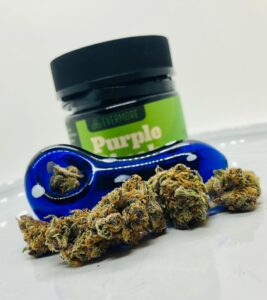 I heard Obeah many times touted for its amazing power to sedate, but what really surprised me with the level of cerebral stimulation I experienced mixed with a sort of  I was really surprised at how at first it hit me with a warm cotton feeling in my head and throat and eventually my chest which really propelled the initial cerebrally uptick into high-altitude mood elevation. 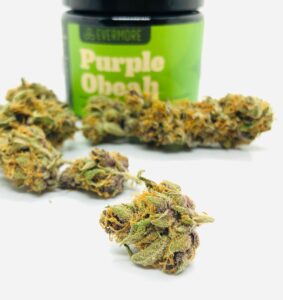 Definitely after successive sessions and in higher levels of ingestion and depending on your day you will feel a little bit tired possibly even sedate and possibly Purple Obeah will help you sleep… but I would say it’s greatest gift is it cerebral uplift and first and foremost its augmentation or sharpening of mental focus. 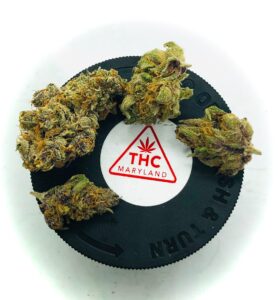 I had just medicated and walked by the intro to the 1980s counterfeiting high-art crime drama, To Live And Die In L.A. …(IMDB LINK HERE)I sat down on the ottoman roughly 4 ft away from the screen and watched the entire movie…and I mean until the last credit.

Let me just say, Purple Obeah, Forbidden Fruit, whatever we may call it somehow managed to compartmentalize, in fact, completely marginalize all of my stress and negative recursive distracting thoughts…at least for the time being…And I was 100% present and enjoying the movie something I haven’t done for quite a while and by myself… well …with my dog Clyde.

I look forward to trying Purple Obeah again and I’ll definitely keep an eye out for a batch even a point or two higher in THC percentage …although that would not dissuade me even if I saw that 13%..
Also I’ve noticed that some strains don’t have that one of legs like the last reviewed evermore favorite Sunset Octane I would say that Purple Obeah is longer lasting. 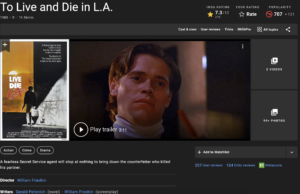 Oh and if you like LA neo -noir L.A. crime dramas, check out to Live And Die In L.A. or watch it again, trust me, it holds up interesting to see such a perfect encapsulation of a period of time from a very unique but somewhat believable angle.