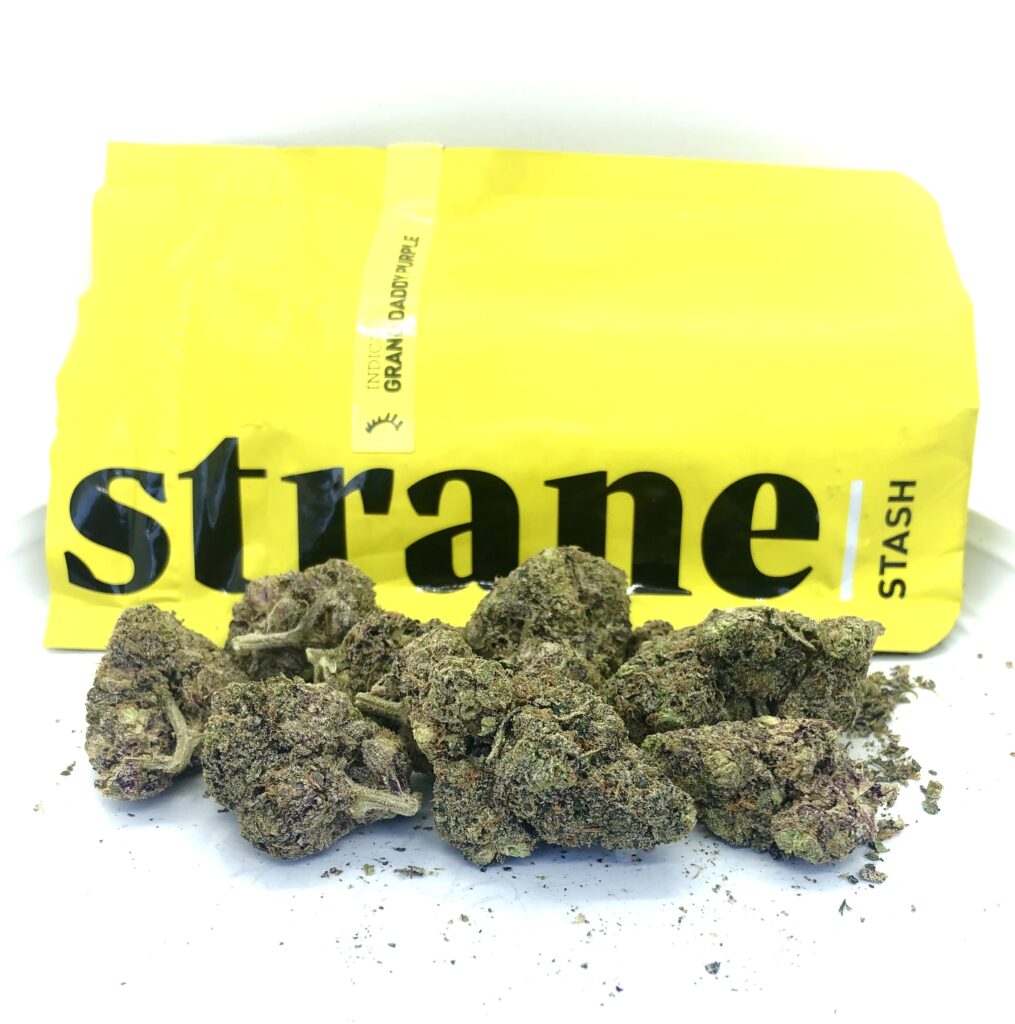 While there is some debate regarding the origin of what we collectively refer to as Grand Daddy Purple or Granddaddy Purps, there is no doubt that the now-legendary breeder Ken Estes.

As the story goes, Ken was introduced to a visually purple tinged cannabis variety used by a certain Native American Church by a member of the group. After this experience he was able to garner a few and continue the breeding process.

GDP delivers an almost instantaneous uplifting cerebral euphoria that washes away acute and residual stress and tension and leaves a mentally stimulating creativity and focus as much as it may cause an increased level of personal internal and social engagement.
The physical euphoria is not far behind offering a deep wave of an almost numbing relaxation. The mind continues to seek new ground as this steady surge of body based peaceful euphoria keeps the experience anchored. Higher levels of ingestion can precipitate an increase in appetite as well as somnolence possibly leading to sedation

Some may want to approach Grand Daddy Purple with caution as its THC percentiles aren’t really relevant to its true potency overall and its effects have a decidedly energetic cerebral quality especially in the onset stage. 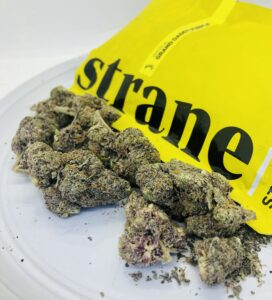 Can help mitigate or alleviate. some symptoms associated with: 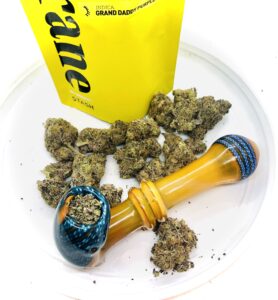 Strane’s rendition of this modern classic is quite emblematic of GDP in the color department.
When ground the purple is even more pronounced against the myriad of greens; especially offset by flecks of brighter almost fluorescent green.
Good For Bowls and Rolls: GDP
quite suitable for all. Best when ground but after about a week it’s much easier to break down by hand. 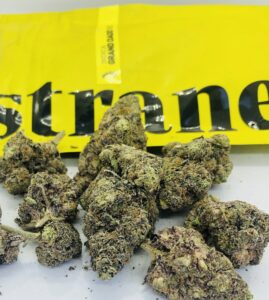 At times, Grand Daddy Purple can be somewhat harsh. But, even the sharpest hit usually resolves in a cooling grape flavored exhale 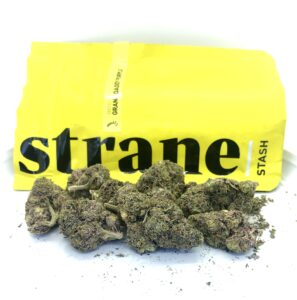 You may have noticed that many cultivators are now using ziplocks for their packaging. Many multi-state operators cultivating in Maryland like Kind Tree, Harvest (Roll One, Modern Flower) for instance seem to be exchanging their rigid, structured, and sometimes overly ornate glass and plastic packaging for ziplocks bags. This move toward the bag may be a response to rising costs as it would seem to lower overhead. With less money spent on unnecessary fluff like glass jars wrapped in hemp cultivators can lower their prices to a more competitive bracket. It is rather disheartening at worst and silly at best when you open a box to get to a plastic dram that is only one-third filled. You may wonder what you’re paying for; you may even justify bringing this dram into your home by coming up with all the ways you can repurpose the tin or jar should you decide to keep it. Surely that’s worth the extra money you spent on this flower ….right?

The Strane “stash” bag seems to signal more of the same; yet another example of the notion that in the world of cannabis packaging glass may be the Past.

The Strane “stash” bag is yet another sign that the glass dram may be on its way out.

Glass is the Past in cannabis packaging. The disparities between product to packaging ratios seems to reek of unnecessary cost where the coverage outweighs the event.
Prices are increased in just about every sector of the economy. Paying $65 for an eighth of flower in an ornate jar shrouded in a box does seem a bit obnoxiously extravagant from a consumer’s standpoint.

To be fair, and give credit where due, Strane’s puck drams are possibly the best  structured or “hard-box” packaging around. They definitely have their advantages and at least they aren’t glass .Strane’s puck dram does have its upsides. for one its not glass.
It is easy to stow away in any front pants pocket; slim enough in fact to fit quite comfortably in a breast pocket at that; barely taking up more space than a can of Skoal or similar product.

If you work in a dispensary in Maryland, you might appreciate Strane’s puck-style dram even more. Strane does provide shelf boxes for their partners making it easier to organize. They are easy to stack or stock and store I should say. Whether you orient them vertically in stacks of say 2 to 4 you can also have them in forward facing fashion vending machine style and that is only limited by the depth of your vault’s shelves or an inventory cart that is placed on a shelf.
But, they are still a hard-box dram.
Strane has the joined the brave ranks of Kind Tree, District Cannabis, and the very first cultivator to offer a ziplock solution, Harvest and their Roll One and Modern Flower brands.
And it is eye catching to say the least. Blaring caution yellow with small modest black text at the top- and made from a softer more playable less plastic to the touch type of non-plastic plastic.
My first encounter with Strane’s new ziplock was impactful simply because of the size as it housed a full 14 grams or a half ounce of expertly cured bud. I was very pleased with this because it was easy to open yet appears to have a better locking system than some other ziplocks I’ve seen. And, after almost two weeks now I can attest that the Grand Daddy Purple buds awaiting their inevitable consumption are still fresh; they aren’t dried out or shedding trichomes; they are quite spongey still with just the right amount of give. All in all I am very pleased that Strane went this route; especially for half ounce.
-_—-_____

Granddaddy Purple aka GDP aka Grand Daddy Purps is of unknown origin and usually thought to be a cross of Mendo Purps X (Skunk #1 x Afghani Landrace strains. Although structurally an Indica GDP’s effects arrive with a rush of cerebral energy that if experienced in  micro-doses has the potential to ignite creative impulses and augment focus. In higher doses however GDP’s characteristic sedative euphoria kicks in further obiliterating mental stress and fatigue as well as grounding the body to an immobilized state of euphoria. GDP’s amplification of the senses in general but specifically the ability to focus for longer periods of time is a hallmark of its high making it a good choice for those who wish to reap its more cerebrally activating effects. Others looking for a way to increase appetite or facilitate sleep can also utilize GDP’s classic narcotic euphoria by simply ingesting more. All in all GDP can be quite a useful strain considering the breadth of its potential to inspire creativity and amplify focus as well as calm the body into a sedative stress relieving euphoria.