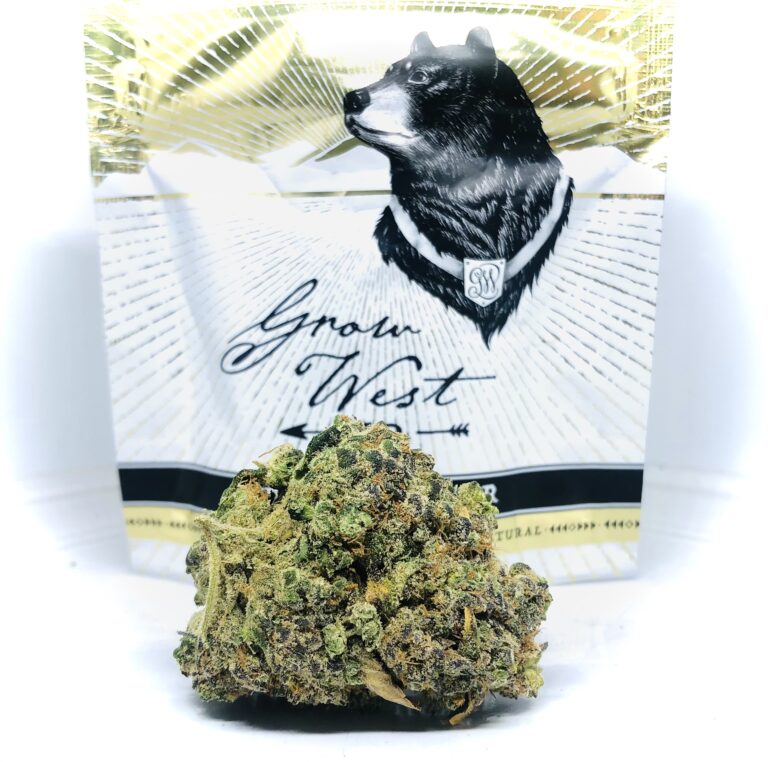 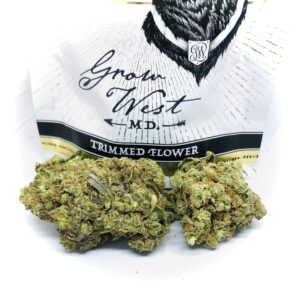 Fruit Stripe Gum is an interesting strain if for no other reason because of its complex genetic background. This also however translates into an aroma, appearance, and set of effects that are equally as complex and intricate. Its Green Crack parent seems to play a prominent role here, at least in the early onset after first exhaling Fruit Stripe Gum.
There is a sort of elevated mental clarity and focus as well as general lightness of being that soon develops.

With this elevated euphoria stress and anxiety can only take a back seat. The degree of focus enhancement is what really seems to be attributable to the Green Crack genetics. 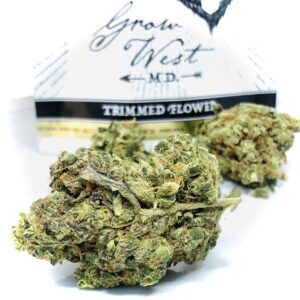 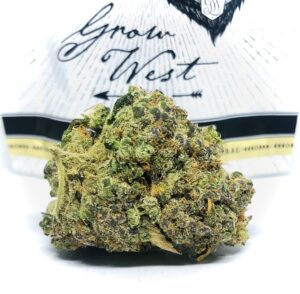 Some may complain about Grow West’s definition of “trimmed”; I on the other hand do not. And both 1/8ths that purchased were comprised of what amounts to one big bud. That being said several of the 1/8ths of he same batch seemed to be a bit more scraggly .
Perhaps is the nature of FSG’s genetic complexity or maybe Grow West didn’t make a concerted effort to spread the buds so to speak.

FSG like many other GW strains has an arrestingly gorgeous landscape filled with a multi-hued tapestry of leaf and stigma accented by lush trichome coverage.

The overall first impression here is one of wonder as the eye travels over the motley colored and dense buds.
Fruit Stripe Gum has gerth and substance; a mostly rocky surface with crags and crevices that conceal droves of trichomes. 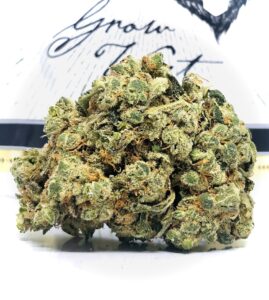 Good  For Bowls and Rolls:

Grind for best results. Somewhat dense buds but more spongey than hardened. It needs a little help to become spliff-worthy 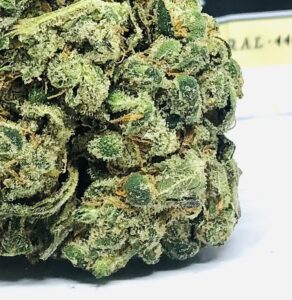 The impact of FSG’s aroma outshines any other aspect of its character. This bud is pungent. I don’t express this lightly as I encounter a lot of different and very aromatic flower. But FSG may bring some to question their purchase upon opening the dram. An immediate wave of cheese, onion, garlic, pepper, steak sauce, and soup mix floods the nose propelled by an undercurrent of sour skunk that leaves its mark and then some as it lingers awhile in the soft palate after wreaking havoc in the nostrils. 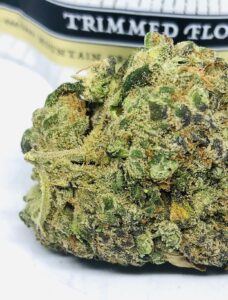 From here on out this will be an unmistakable sign that I am indeed smoking FSG or at least a close relative. I have little to no experience with its parent strains by themselves aside from Green Crack aka Green Cush and Bubblegum aka Indiana Bubblegum, incidentally one of my preferred strains except for a component of FSG’s skunkiness, which isn’t wholly unlike that exuded at times by Bubblegum.

However neither of these aforementioned have an aroma similar to that of FSG. This leads me to believe that it must be the influence of Jaffa Cake and The Black, both of which remain somewhat of a mystery to me. 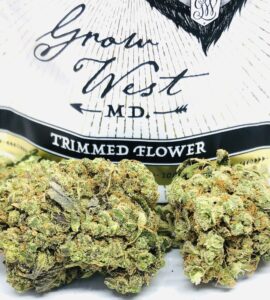 But here’s some background:

The Jaffa Cake strain is a cross of (Mandarina x Cookie).

A Jaffa Cake is a real thing; a pastry or baked good rather. Here’s what the webinet says:

“Jaffa Cakes are a cake introduced by McVitie and Price in the UK in 1927 and named after Jaffa oranges. The most common form of Jaffa cakes are circular, 2+1⁄8 inches in diameter and have three layers: a Genoise sponge base, a layer of orange flavoured jam and a coating of chocolate. Each cake is 46 calories. Wikipedia

So the abundance of orange aroma and flavor  in FSG’s profile may be attributed to this strain.

The Black is a somewhat infamous flower created by B.C. Bud Depot https://en.seedfinder.eu/strain-info/The_Black/BC_Bud_Depot/

And it is supposedly born from two Landrace strains: one Mexican and one Afghani.

This seems to account for FSG’s darker leaf and bud hues that verge on dark purple and violet. But it may also account for the weighty ocular pressure that seems to hover over your 3rd eye right in the middle of the forehead and its somewhat lazy sedation 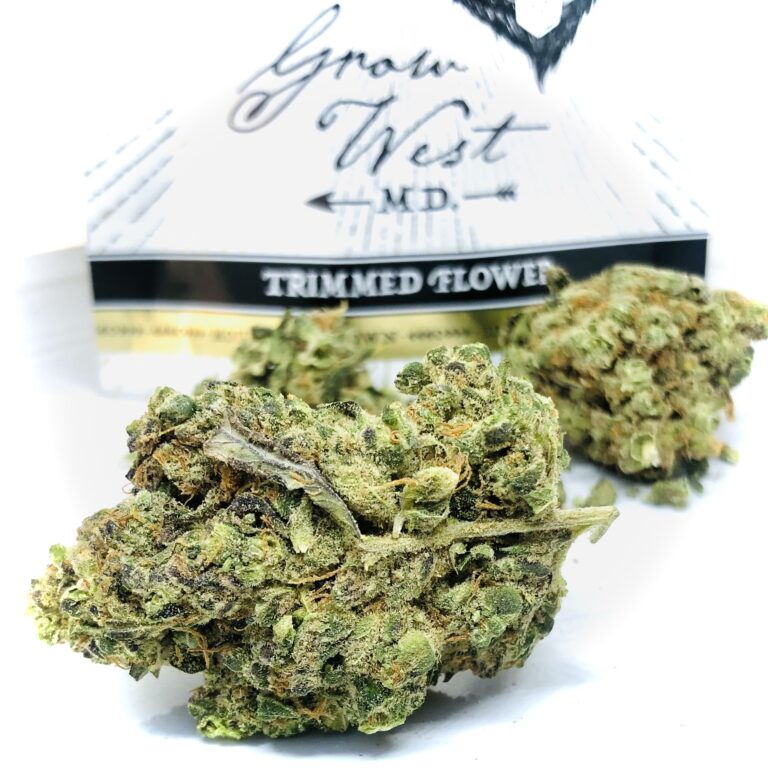 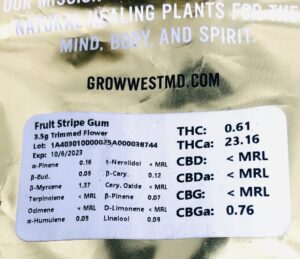 You could label FSG as a “Myrcene bomb” which for some disqualifies any hope of it being an agent of uplift and focus. However something from its complex genetic background is peaking through and providing a seriously invigorating cerebral front end to its arc of effects.

For me anyway, this state seemed to have long enough legs to reach the end of a todo list but I found myself returning again and again to reignite the initial burst of inspiring creativity and mental uplift.
. 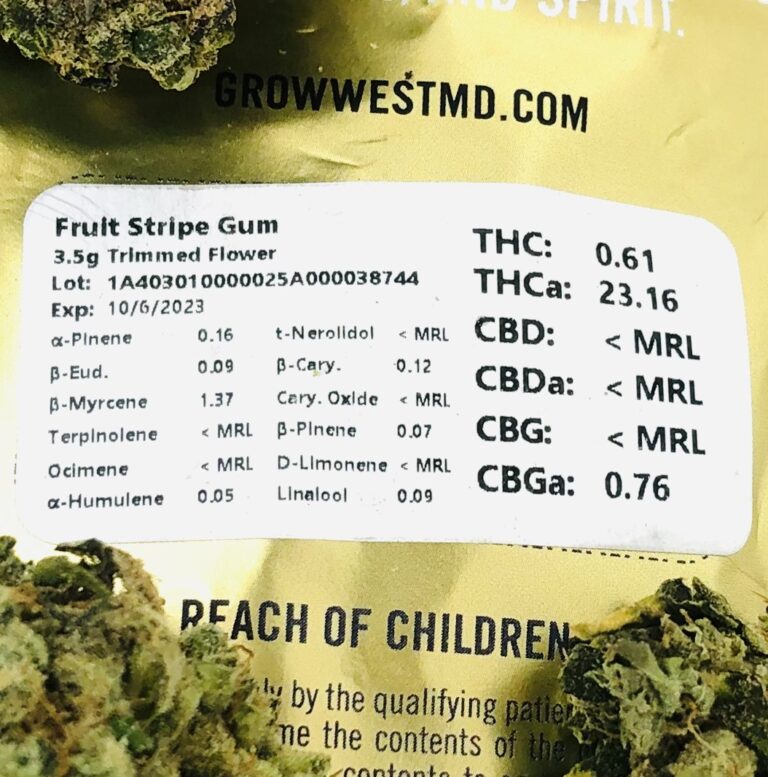 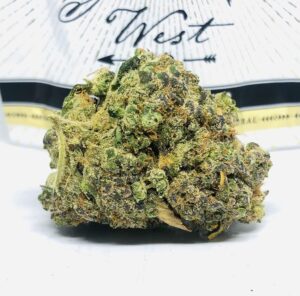 Fruit Stripe Gum is originally bred by 3rd Eye Genetics and is cross between Jaffa Cake x The Black x (Green Crack x Bubblegum).
This complex breeding leads to an equally complex aroma, flavor, and effects profile which sets FSG above and beyond most competitors. FSG displays an array of color and its aromas present a mix of floral, cheesey, sour, and pine notes that can excite and tantalize the olfactory system.

Fruit Stripe Gum can impart a very wide spectrum of effect as it moves from cerebrally awakening to physically sedative and with its dosage steering the experience one way or the other. Fruit Stripe Gum is emblematic of the technical altitude that cannabis breeding has reached. A definite hit for Grow West.

In many ways FSG is the best of all worlds without relegating itself in the greatest hits corner like so many of its brethren who’s very existence reminds one of the wise adage that just because you can doesn’t mean you should. I am, for one, very pleased that Grow West decided to grow Fruit Stripe Gum.

Once in awhile a strain will come along, at least in Maryland, that will blow the collective olfactory sense of the community to smithereens. I would point to Grassroots Garlic Cookies as one of these.  I seriously think that Grow West’s Fruit Stripe Gum may come close to this level of attractively astringent and disgustingly fragrant. 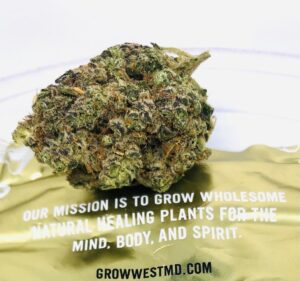 In the days of prohibition, in an unregulated market, all we had was our sense of smell and our vision; aromatics and optics. By this point of reference, Fruit Stripe Gum would’ve been the one that your supplier would nod to you knowingly about.
Anyone in their right mind would choose this most of the time over anything that might be presented visually, simply for the aromatics. 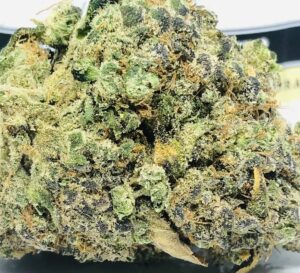 Either way the effects were also stellar. A little spacey from the terpinolene but overall, and especially in micro to medi doses, quite an uplifting and focusing experience.
Grow West has a hit here and I hope it isn’t just a genetic stepping stone to another flower but rather an ongoing exploration into how dank one can get. Keep it up guys.