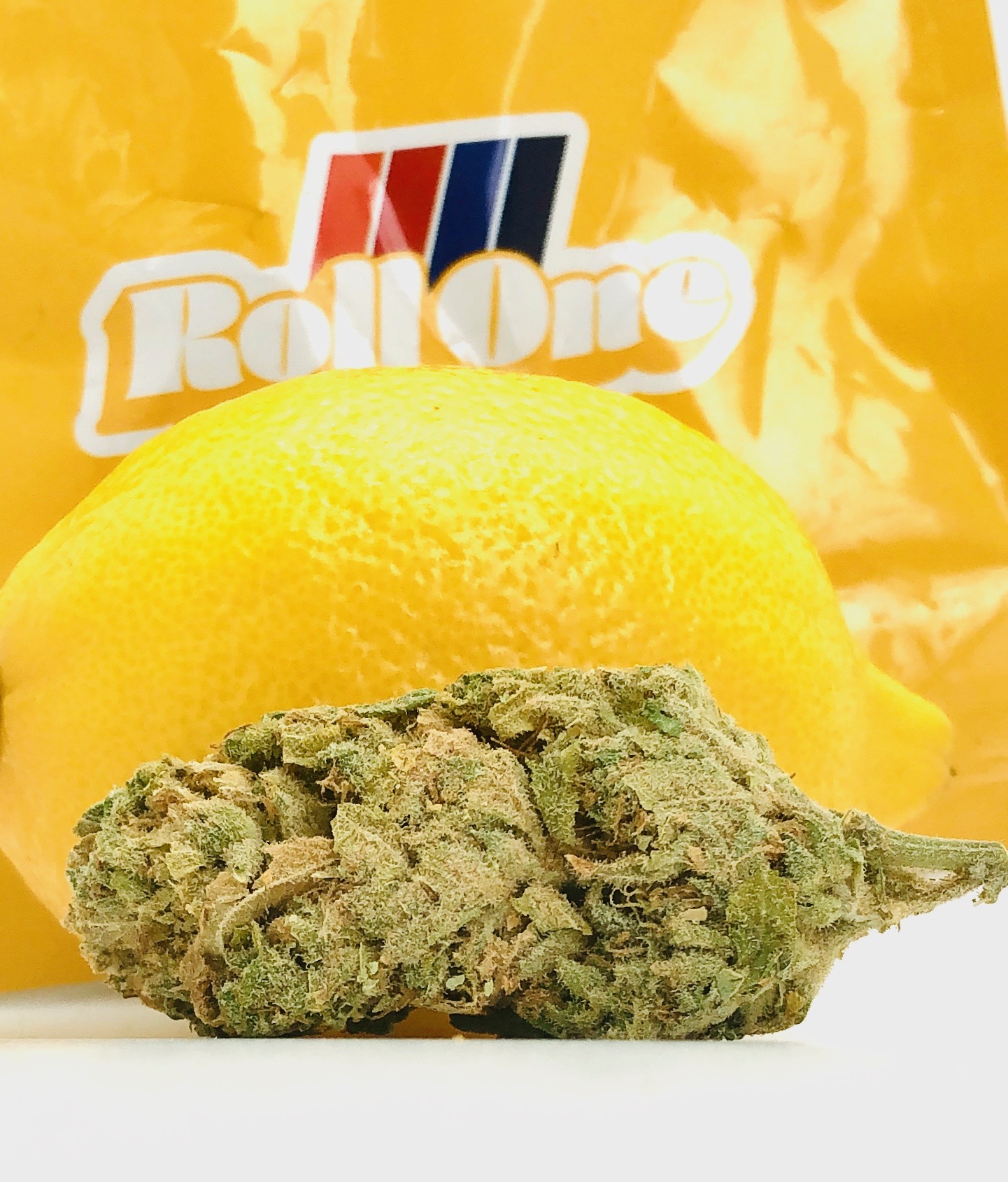 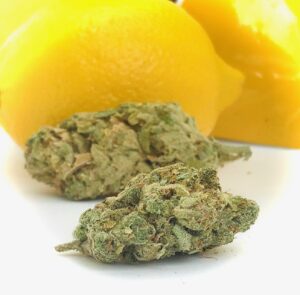 EFFECTS (MIND + BODY):  Overall very cerebrally uplifting and somewhat energizing but more on the kush side of steady, mellow, and motivated rather than excitable

*NOTE: Lemon Kush Headband is a very functional Sativa since its cerebral stimulation has such a mellow tone. The euphoria is a definitely an uplifting but it comes with a certain component of calm. This could be a much needed and welcomed trait for those who often pass on Sativa strains out of trepidation …perceiving them to be too cerebrally stimulating and thus causing anxiety, panic, and dread. Lemon Kush Headband is a good option for patients who want to experience uplifted euphoria (often attributed to Sativa strains) without any of the existential dread or potential for recursive and negative thinking.

**NOTE: Lemon Kush Headband’s most useful effect is augmented focus and concentration IMO However, after successive sessions / larger consecutive doses, this heightened sense of attention and focus begins to transition into more of a cerebral haze which progresses towards sedation and sleep. 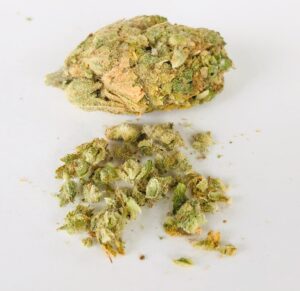 APPEARANCE;
Roll One’s Lemon Kush Headband, at least this batch and my only experience with this cultivar, is a bit of a wild unruly looking flower. I don’t think it is a reflection of Roll One’s price reduction or their capabilities in general. But, after After looking at other images of this strain it seems that a purple or reddish leaf hue is a constant. I didn’t see any visual evidence of this with Roll One’s Lemon Kush Headband. It was the typical and characteristic light green overall, but it seemed to lack any other color close to the reddish purple aside from the lighter than normal color of the pistils/stigma/“hairs”
In other words the examples I viewed looked a bit more exotic.
In the end the characteristic effects of Lemon Kush Headband were in full force as you feel every bit of its roughly 19% THC level.

Good For Bowls and Rolls?…:
Breaks up easy enough by hand- buds got a bit denser by day two. After a few days it took on a bit more of a skunk aroma. This was especially true after the last large Bud was broken up into separate smaller flowers and stored in a sandwich bag. I believe this may be attributed to the Original OG strain genetics. I’ve have no personal experience with this strain in its non-hybridized form, but which some research shows to exude a notably skunk-like aroma. It was very slight here, and only really present after about 4 -5 days after purchase. The other side of the equation points to a more thai landrace -type of aroma mixed in at the base level – and only present after a few days inside a sealed baggie within the roll one container which also has a zip-lock seal 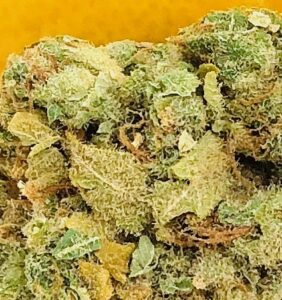 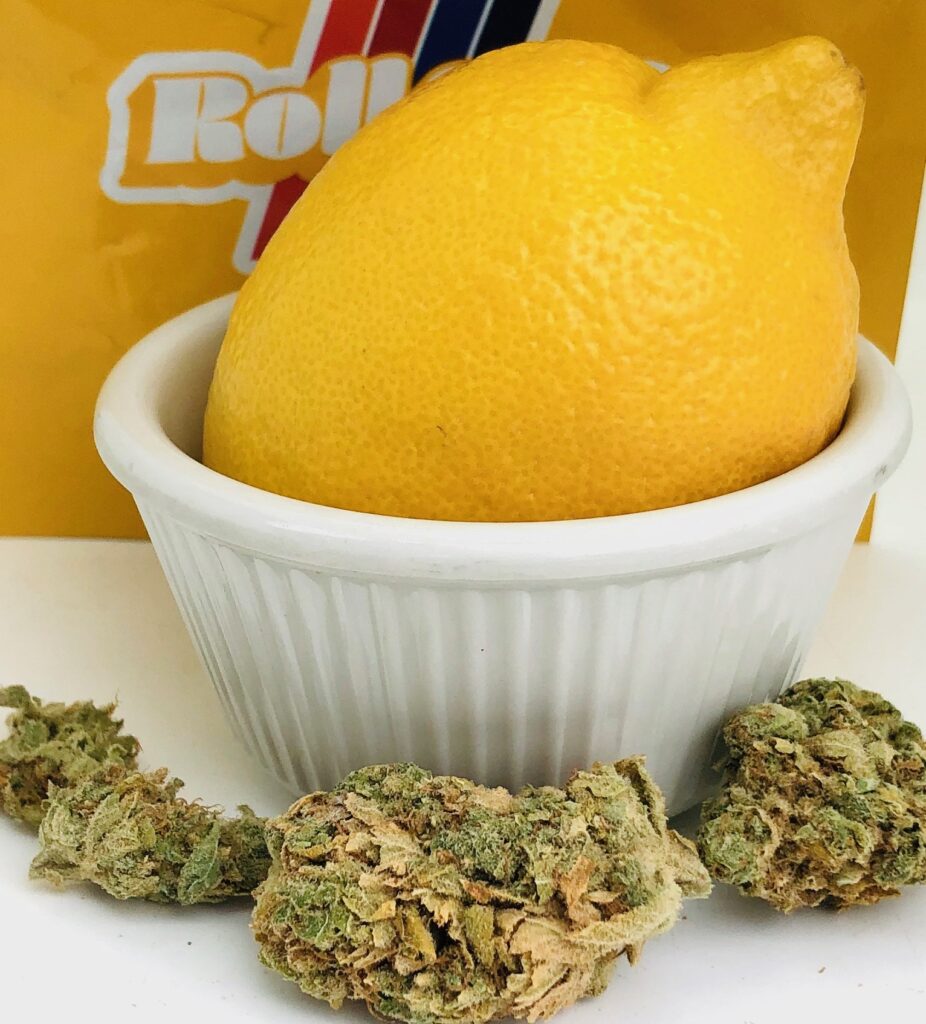 As mentioned before, the top terpenes in order of highest concentration, in this batch of Lemon Kush Headband are:

I found it refreshing to see Myrcene, a terpene mostly associated with the sedative effects of Indica strains, being the most concentrated, highest testing terpene in a strain designated as a Sativa. This seems to help substantiate the current trend toward interpreting and recommending strains based on their terpene-cannabinoid profile rather than their Sativa or Indica designation, which truthfully only a superficial label indicating very little on its own.

However, even more interesting maybe was that Linalool made it into the top four, since it’s usually detected in much smaller concentration ( or not at all ).  Linalool is most commonly known as the terpene which gives flowers, including that of cannabis, their appealing aroma. This is why Linalool is instrumental in the perfume and scent-related industries, providing natural floral essence to chemical compounds we use every day. But as research into terpenes continues to develop, Linalool’s role as  sophisticated and complex terpene is becoming more apparent.

Besides being the driving terpene responsible for the aroma of flowers, and often used in the manufacturing of perfumes, Linalool is gaining more notoriety within the realm of Cancer research and treatment.  Linalool has been found to induce apoptosis, or plainly put: it is able to identify, target and destroy diseased cells, while preserving normal healthy cells. This, of course, is the opposite of chemotherapy which indiscriminately destroys normal healthy cells along with the malignant cancer cells it is attempting to eliminate.

Here’s a link to the National Library of Medicine explaining Linalool and apoptosis. CLICK HERE 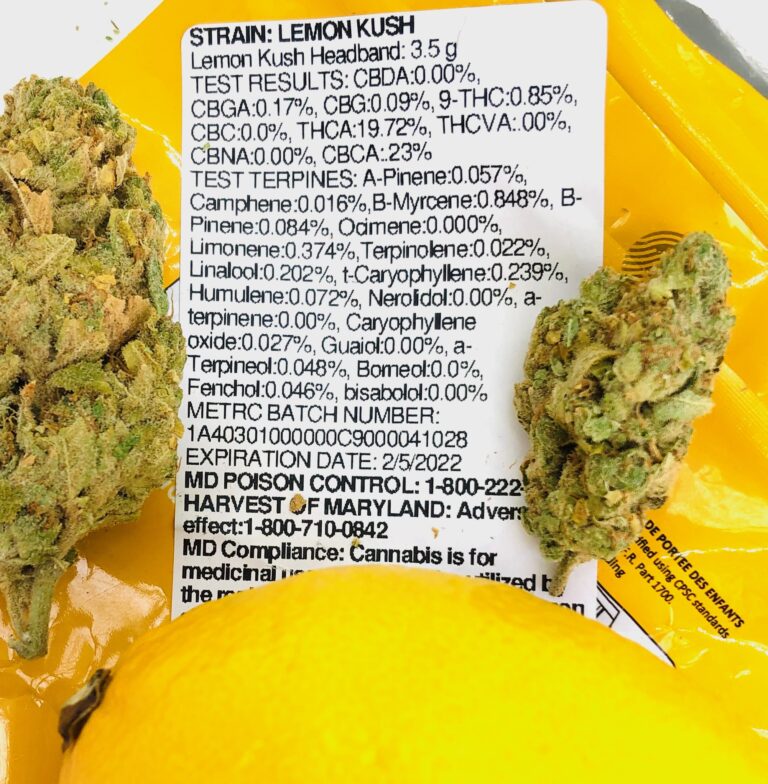 MEDICINAL;
Can help mitigate or alleviate. some symptoms associated with:

*NOTE: although I personally feel that Lemon Kush Headband stimulates my appetite, there is a mentionable amount of Humalene (.072%) in this batch and Humalene is a terpene known for suppressing appetite. So, as always my experiences and reaction are my own and may differ greatly from your own.

RECREATIONAL:
Lemon Kush Headband is a great morning and afternoon strain. It definitely can be a bit of hazey-stoney experience if you are ingesting a lot at once or over the course of the day, but for the most part it will keep you on course through your day.  I did feel that, at times, after many sessions, that there was some dizziness but it was not to an overwhelming degree.

Lemon Kush Headband is also a nice companion for watching movies and discussing them in detail as well as lending itself quite well to creative pursuits.  This is a very workable or easily modulated strain, especially at this potency and can potentially enhance most any activity you pair with it.

This is mostly because, while it does provoke thought, enhance focus, and generally makes things seem a bit more engaging, it has a mellow, serene physical high that persists and progresses throughout the experience. This allows your mind to wander a bit with a sense of calm. By the same token too much of a good thing is not always ideal, and likewise higher doses and/or successive sessions with Lemon Kush Headband can precipitate some couch-lock and possibly sleep. It may be wise to take a minute and let it sink in before ingesting more.

This shouldn’t be much of an issue since Lemon Kush Headband offers such an immediate and distracting euphoria that you will most likely forget to finish the session you began…always a good sign. 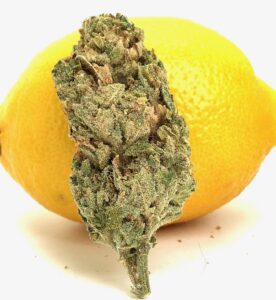 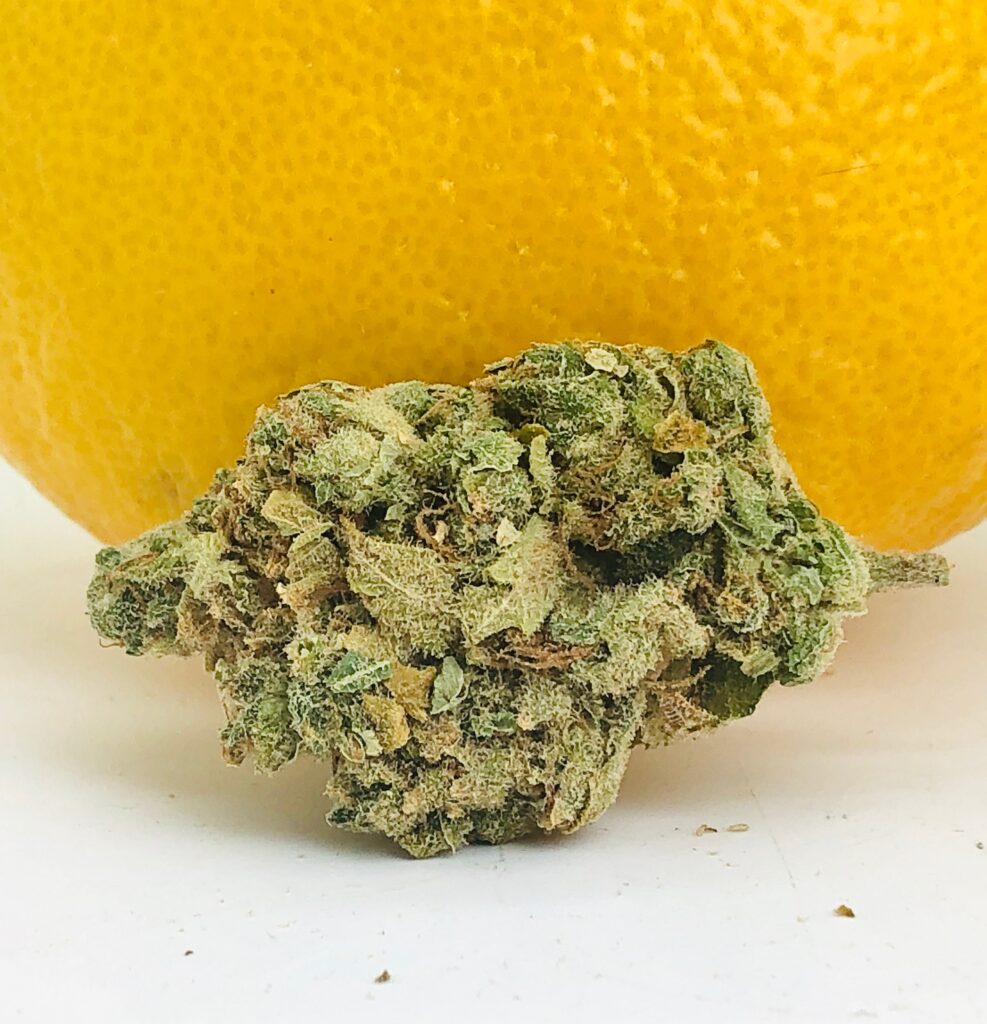 THE LONG ROAD HOME (My Toke…)
Roll One’s Lemon Kush Headband was an interesting strain. For one thing, like Durban Poison, Papayahuasca, and Northern Lights among others, Lemon Kush Headband does not need a record breaking THC level for you to be moved by its effect. 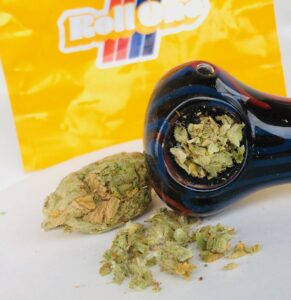 The wave of mellow, but decidedly uplifting cerebral euphoria arrives rather quickly after exhaling and a flush of warmth seemed to come over me. The most immediate physical sensation was that of the tell-tale cranial, or rather brow=level pressure that seemed to wrap around to my temples. This was not overwhelming but a bit more pronounced than normal. I say this because it felt like the ocular pressure from say, a 25% THC potent strain rather than the 19% that it is. For it to be that noticed at that level of potency seems to me to indicate that it is a pronounced or exaggerated effect of this, and any and all “Headband” or “Headband Kush” strains.
The generalized warmth I felt was mostly relegated to the chest area. And, At times, and after successive sessions, Lemon Kush Headband made me a bit dizzy….again, even at 19%.

While a cerebral euphoria and heightened sense of focus seem to steal the show, I think it’s worth noting that Lemon Kush Headband offers a considerable amount of physical relaxation and euphoria as well.  The fact that it is designated as a Sativa but its highest concentrated terpene is Beta-Myrcene, was very interesting to me. It seems to support the notion of strains being judged, and therefore recommended, based more on their terpene-cannabinoid profile instead of their THC levels or their Sativa or Indica designation alone.  I came about this way of thinking because of the way I tend to respond to Afghan and Kush strains, most often relegated to the before bedtime Indica club. 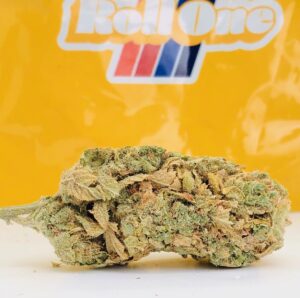 For me, especially in smaller, micro doses, some Indica strains offer a steady and controlled flow of focused creativity. This can be a difficult position to hold, but with enough restraint and patience, the results can sometimes be better than with a Sativa. I think this is because you are also most likely going to receive a bit more Caryophyllene and Myrcene, and other terpenes most abundantly found in Indica strains,  than if you medicated with a typical Sativa for instance. Therefore, your body will be more relaxed, helping your mind to do the same.

Lemon Kush Headband seems to be rather perfect for someone who wants to feel some type of focus and cerebral euphoria from the sativa side of things, but with minimal potential for feeling paranoid or anxious.

Harvest is considered by some to be of mid-grade quality and I would say this is not accurate. Yes, sometimes their trim is a bit ragged and yes sometimes it seems that some of their flower can exhibit some, well let’s say more rough around the edges qualities now and then….like the somewhat harsh exhale of this batch of Lemon Kush Headband. But I think more of than that, what we are seeing from Harvest is a more naturally grown, less genetically engineered flower. And, truth be told, many of the “top shelf” priced brands have issues from time to time as well. Take for instance my review of Curio’s MK-Ultra or gLeaf’s Island Sweet Skunk X Sour Diesel. You get the picture.

Keeping this on a positive track, I think that Harvest has been consistently been releasing solid product for some time now. Comments on this are welcome.
BUT, I would say ultimately, these strains from Harvest Roll One and/ or Modern Flower are less expensive than anything else on the market at this time. And, it may not be top shelf Verano or Strane level every time, but it is consistent and it is quality flower …and you won’t find ANY better at that price.

I will most definitely purchase Lemon Kush Headband and could head down again and probably from roll one even if it was possibly 18% because I feel that the entourage effect really seems to be proving itself here and the THC level seems to matter less as you work your way through the bag.

I think Harvest made a really solid choice with this one for a Sativa in their new Roll One brand line.
I look forward to see what they will be rolling out next. Maybe they could send me a preview sample?  ? anyone??