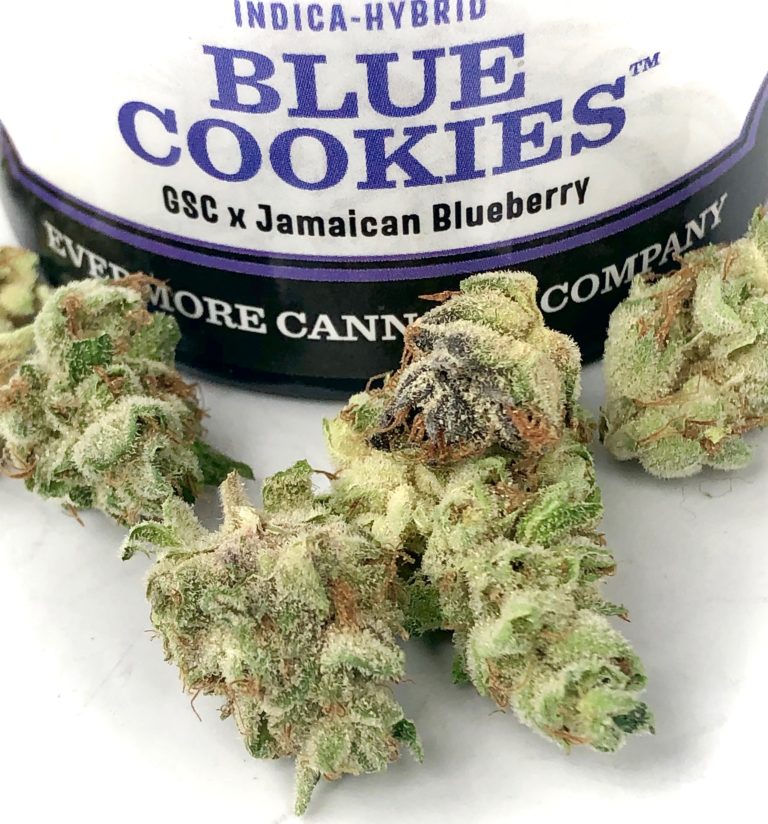 NOTE: Despite its Indica Hybrid labeling genetics point toward a considerable Sativa component. Jamaican Blueberry is one of the oldest Sativa strains, typically rated as a 70/30% Sativa/Indica.

Also, GSC, its other parent, is well known as being a 60/40% Indica/Sativa. So Blue Cookies definitely has a Sativa side regardless of what the labeling may reflect.

PHYSICAL APPEARANCE (consistency):
Good For Bowls and Rolls: this strain’s texture, consistency, and cured state (especially this particular batch) was fluffy and dry. The small elongated, fluffy appearing, calyx are emblematic of the “cookie” strains in structure and for the most part, are rather fragile. Leaf color varies from mint green, dark blue, and even some seemingly chlorophyll deficient white leaves. The color of the  stigma, or hairs, covering the surface range from bright orange to green.  *The white leaves and the green stigma in this batch could be an indication of immaturity, but it didn’t seem to effect the strength.

AROMA: leaning towards artificial blueberry easily attributed to its Blueberry genetics. There is an underlying almost grassy- homegrown variation of the sweet GSC aroma palette. Evermore’s Blue Cookies hides its potency behind what is, at times, a rather bland aroma.

TASTE:  hints of berry, very sweet on exhale with some artificial blueberry scent when exhaled through the nose. At times, there are notes of pine, and an earthiness, verging on a hash-like taste, present as well.

That being said, and despite the more traditional Indica physical effects presenting first after exhaling, the mind energizing Sativa effects are more than just present.  In many ways, this version of Blue Cookies is a Sativa dominant Hybrid in disguise.

Users should note that the effects of Evermore’s Blue Cookies is a bit more cerebrally charged than what one would maybe expect.  I would definitely purchase this again even at a lower potency.

A CLOSER LOOK AT WHAT’S INSIDE:

Much like the other strains I’ve recently tried by Evermore, Blue Cookies, although not setting any potency records, is packed full of goodness and delivers quite an entourage punch to both mind and body. With such an array and concentration of terpenes and CBD, the Evermore strains that I’ve tried as of late tend to feel more potent than their THCa or THC levels might suggest.

I would venture to say that any strain produced by Evermore is going to deliver well beyond what its labelling might even humbly suggest.

However, taking into account the terpene levels along with the addition of the other components is by no means an anemic cookie…

Evermore is not skimping on chips in these cookies… 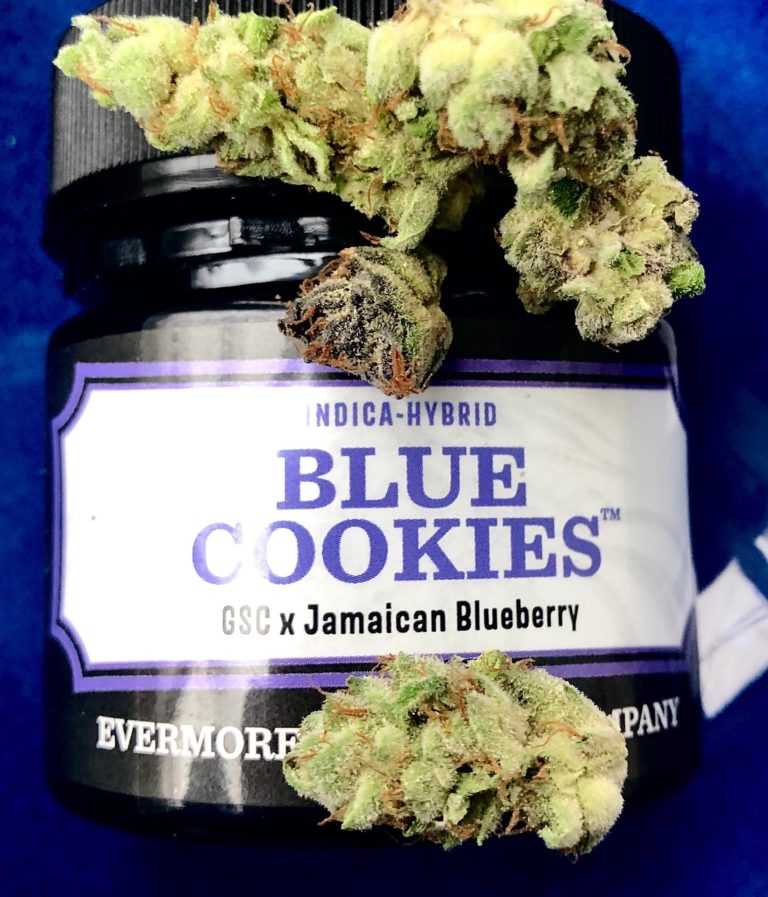 Evermore, who I believe started out only producing concentrates, is currently producing excellent flower worthy of talking about and definitively worth trying. I don’t think you’ll be disappointed.

This particular strain by Evermore, is really something beyond what I normally encounter with regard to overall entourage effect due in no small part to the level of terpenes, CBD, and CBG.

As an Indica Hybrid, It’s genetics hint toward a very physically relaxing experience, but because of its Sativa genetics, this strain offers some cerebral stimulation as well, which was noticeable and useful enough to expound on here.

I suppose again, much like Tropical Sunset, we are to infer that the ratio of Sativa to Indica genetics have been atypically distributed in this Evermore strains. And that’s perfectly fine with me: call it what you would like. if I could have Evermore Blue Cookies around all the time I’d be that much happier.

Because of the white hue found in some of the smaller cookie-type buds along with the green stigma,  often indicating immaturity, I thought that maybe  this batch of Blue Cookies had been improperly cured(?) Nonetheless, besides this, the quality of the bud structure appeared mature, the taste very articulate, and the overall effect very developed, well rounded, potent, and consistent

Upon my first toke I felt the heaviness of this Indica straight away.

The first sensation was a body warmth that swept through me before my first full exhale. This most pleasant sensation of warmth  lasted for quite awhile later into the high.  All this whilst I was outside in Baltimore cold mind you. It was so pleasant I think I would have mentioned it first even if it wasn’t the first effect to be felt.

Immediately following the onset of bodily warmth came some pleasant ocular pressure but it was hard to perceive readily. Also my mind was almost immediately awakened and stimulated to the point of beginning to write this review. I stayed focused and on task for a good 45 min to an hour after only one huge toke.

After the 2nd helping I was made very aware of the Blue Cookies effect as a stimulating Indica and I was inspired to tackle a to do list of sorts.

I must confess, most of the time will only regard strains that test on the higher end. But, once again Evermore has provided me with an experience usually only felt after medicating with batches of strains at least 5 percentage points higher in THCa levels.

I am really impressed with potency of their flower. I’m looking forward to seeing what they release into the wild.  I will say that whatever it is, I’m most likely going to purchase it in haste and in multiples and I strongly suggest you do the same. Good stuff. Let me know what YOU think about this or any other strain from Evermore. I welcome comments. Peace. 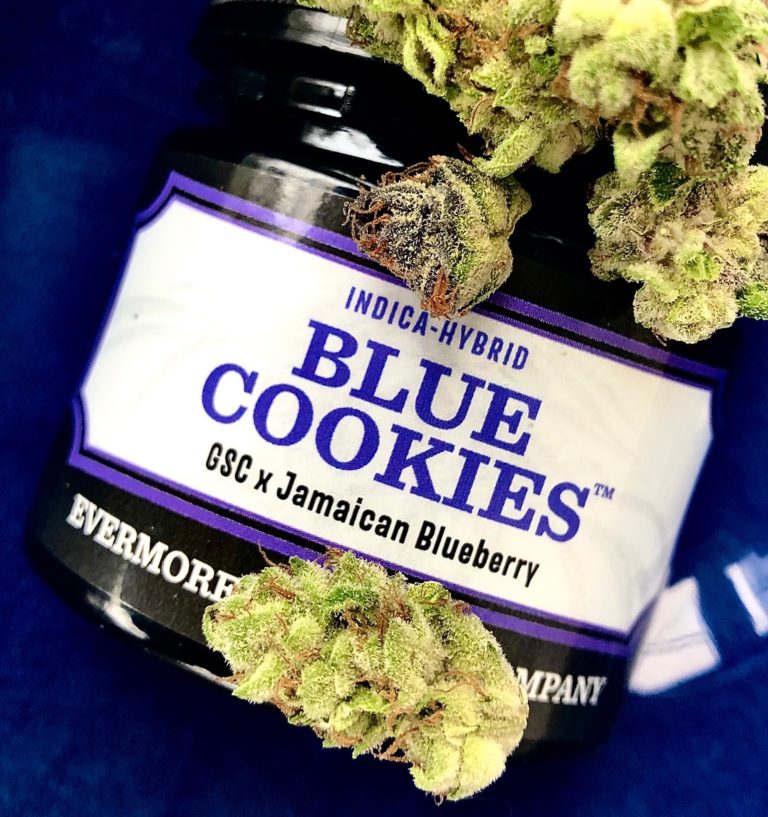