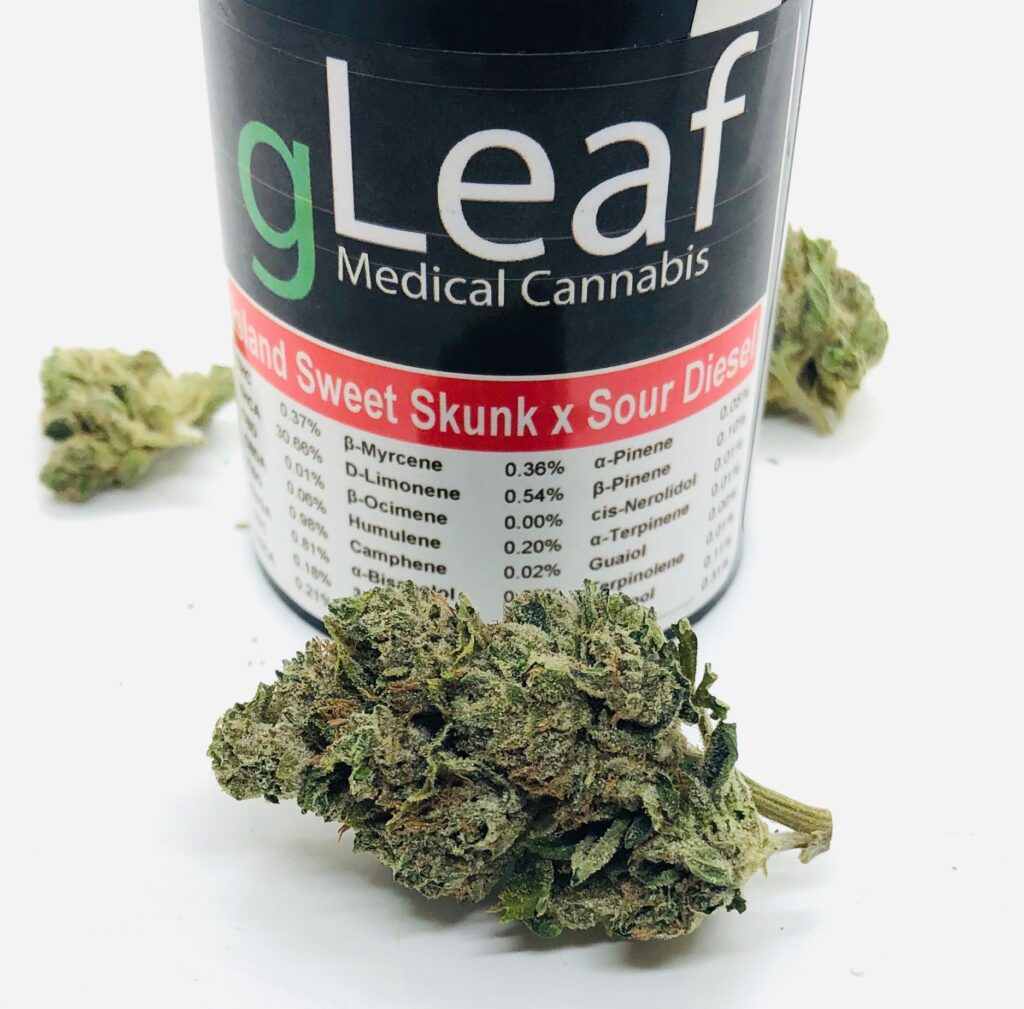 EFFECTS (MIND + BODY):
ISS X SD comes on strong with an uptick in cerebral activity before it is softened somewhat by a more calming euphoric body high. 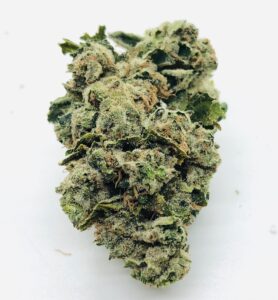 THIS IS NOT SINSEMILLA
Sinsemilla comes from the Spanish “sin”  meaning “without” and “semilla” meaning “seed”.  This is a term most recently rooted in the 1070s in North America. Supposedly some evidence shows this term being applied further back in history in India…So Sinsemilla is simply a female plant which has not been fertilized by a male plant, and therefore, has no seeds.

There are seeds present in the eighth out of the batch of Island Sweet Skunk X Sour Diesel  which I purchased…no less than 12 in fact. 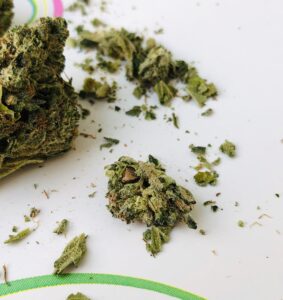 WHAT DOES IT MEAN?
What this means is that either the male plant was not identified properly at gLeaf or there was some possible light leak or other stress that occurred during the flowering stage. Sometimes the plant will respond to this stress or light leak by self-pollinating rendering itself a hermaphrodite, which will self-pollinate and will produce seeds like a female plant that has been pollinated by a male. 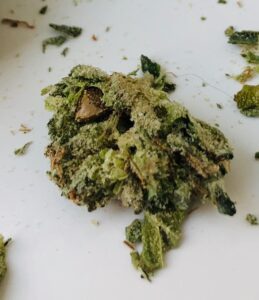 PAYING FOR DEAD WEIGHT and DIMINISHED POTENCY
When you are paying top dollar for top shelf Cannabis flower from a reputable grower, who’s product is regularly inspected and certified, and then sold through a reputable dispensary, that you most likely are paying for Sinsemilla, or at least not paying for a bunch of unnecessary dead weight. I mean some extra material (stems, etc.) are acceptable to a degree. But, I personally found this a bit annoying…at least accidentally combusting a few.

When the plant is in stressful conditions and self pollinates or is fertilized by an unidentified male in its immediate area, the plant diverts energy from producing flowers, or “Buds”, into reproducing (making seeds) instead.  Therefore the overall cannabinoid (THC, CBG, trichomes and terpenes) levels, and therefore the overall potency of the plant is somewhat diminished when the plant is diverting its energy toward forming seeds rather flowers. So, aside from the lower potency, it can be said that you are paying for unwanted dead weight.

The same principle applies to stems as well of course.

If you do encounter seeds try to remove them prior to grinding. Smoking seeds isn’t harmful. In fact, as far as eating seeds goes they are considered a “super food” and you could survive on them solely. There aren’t quite enough in my eighth for that ( I kid)… But, they aren’t pleasant to smoke so try to screen your material beforehand.

APPEARANCE:
The Sour Diesel seems to dominate here.
A bit on the rough side, but altogether classic NYSD traits.
Fairly leafy and brittle, yet the more you attempt to break it up, the more dense it can seemingly become.

One thing to note is the amount of seeds and stems in this eighth of Island Sweet Skunk X Sour Diesel. As I worked my way through this eighth, the seed count grew higher.  The bud was in good condition and the cure was decent…and the effects were quite nice….Comments are welcome.

Good For Bowls and Rolls: Could merit the use of a grinder to break down the dense portions of bud, but you will lose some precious trichome weight in the process.
I think by hand is best with this batch at least.
A bit more suited to bowls but it’s hard to resist wrapping ISS X SD in a blunt, or even a Black N Mild…as I sometimes will do..which would probably make it taste closer to the original NY Sour Diesel taste, at least for me. 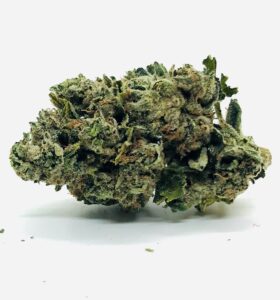 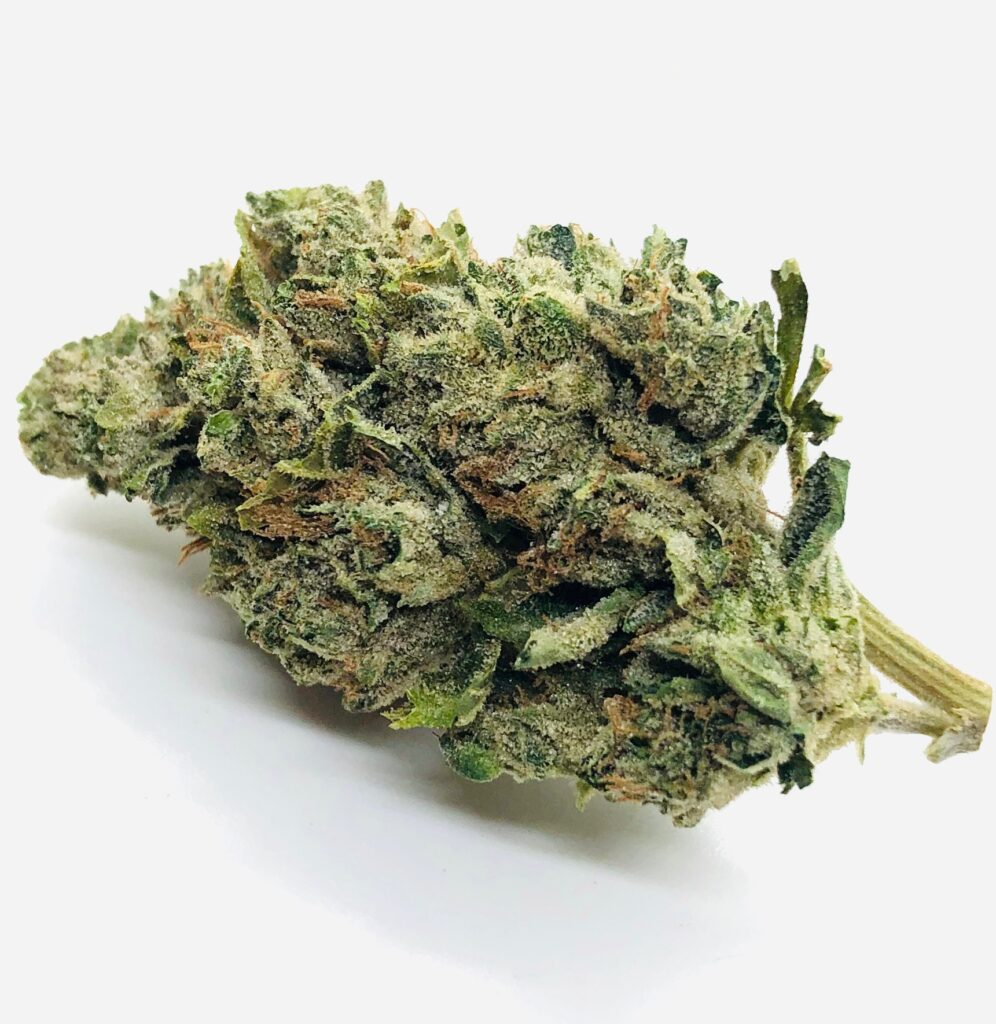 This batch, although riddled with seed material, was quite potent. However, given that the plant’s energy was diverted from terpene and trichome production to reproduction, the overall potency must naturally be diminished somewhat.  Had my eighth been from an actual female plant, I’m quite sure that it would be considerably more potent.

That being said, I did feel what seemed like every bit of .51% Caryophyllene, .36% Myrcene, and .54% Limonene. Even with the fact that it was a pollinated female plant (either by self due to stress or by male due to normal fertilization methods) it was a serious stress reliever and mood elevator. I would love to try some from a plant that was only concerned with adding weight to its bud sites.  Maybe next time. 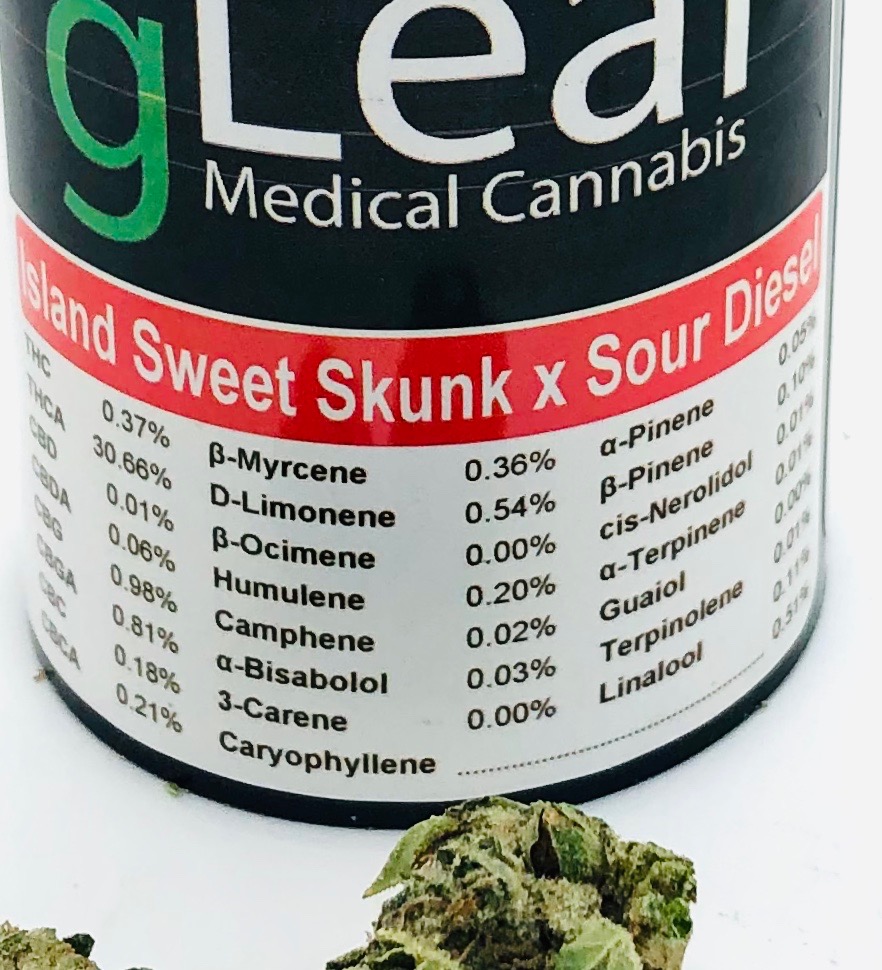 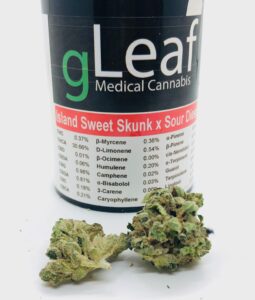 Blending an Indica body high that is weighted but not sedating with a somewhat diminished energized and uplifting Sativa effects of Sour Diesel creates a nice balance between of physical and cerebral euphoria. The frenetic psychoactive experience typically associated with Sour Diesel is somewhat dampened to a more mellow experience overall.

Initially, of course, Island Sweet Skunk X Sour Diesel reports an instantaneous and energized uptick in cerebral activity heightening the senses, and eventually transitioning into a more calming physical euphoria with some of the cerebral effects such as augmented focus remaining intact

Please NOTE:  that there are at least 3 different types of Sour Diesel, and those are the ones that lab testing has been able to differentiate.  There is an in depth article regarding this at Leafly which explains the differences between Sour Diesel A, B, and C.
Click HERE to check it out. 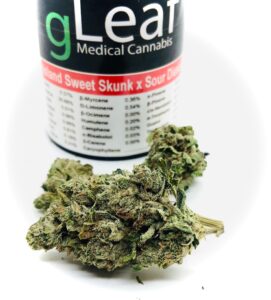 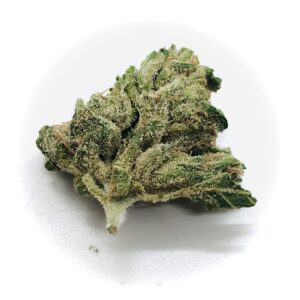 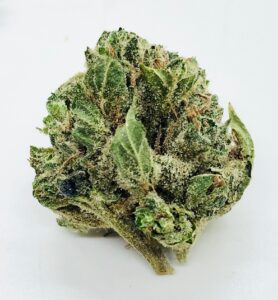 THE LONG ROAD HOME (My Toke)…

The overall effect of this strain is a stoney haze that is anything but subtle.
If you want to remember why you and cannabis became friends in the first place, try this strain. There’s a nostalgia that rides shotgun to Island Sweet Skunk X Sour Diesel similar to Grandpas Stash with its genetic contribution from a 1970s Afghani strain Or the way the Tangie in DSCT or reminds you of that flower in a jar from days of old. 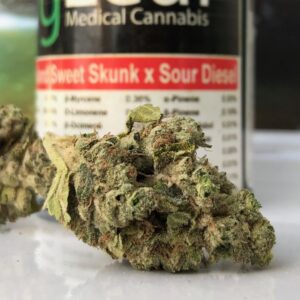 Island Sweet Skunk X Sour Diesel is an interesting strain. For one thing, the blend of tropical overripe grapefruit mixed with diesel fuel is an odd aroma, not off-putting, just odd. Underneath the skunky diesel grapefruit there is an earthy underlying earthy base layer which smells like a mixture of gasoline and soil.

This quality seems to compound when combusted and inhaled and then moves toward a more industrial plastic-like aroma and flavor. Not that I know what industrial plastic “tastes” like, but hopefully you’ll get the idea.

But that telltale aroma of fuel is quite strong with this batch at least.
It smells like it was transported by a fuel tanker, which was what some of us were told back in the day in order to explain the overwhelming petrol aroma of the more gasoline smelling strains that may or may not have been some version of Sour Diesel…at least that was my experience …And in NYC it was a known fact that Sour Diesel could be detected from great distances. Island Sweet Skunk X Sour Diesel is not much different in that regard, and after about three days it actually became stronger smelling.

You will NOT misplace this strain, I promise you. It won’t let you forget where you placed it… 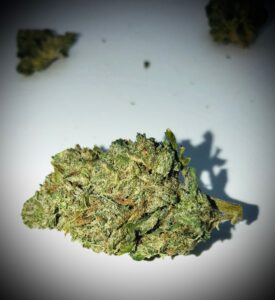 MEMORIES…
Island Sweet Skunk X Sour Diesel  brought me back somewhat to those earlier experiences with what I was told at least, was Sour Diesel in NYC. Back Then, and there, it was usually delivered by bicycle, packaged in rectangular boxes of thick clear plastic (among other bizarre containers) and typically designated as “high” amongst the “lows” and “mids”… sometimes literally referred to as  “Low” and “Mid”. Sour Diesel, to my memory anyway, was one of the first strains referred to by name and having a pedigree or sorts, like Northern Lights at the time.

I recall Sour Diesel as being a very heavy buzz and sometimes. It was possible to regret you “filled your tank” with its gasoline tinged goodness…it was just very easy to “over do it” . And, because it was so potent usually, and the cerebral intensity so high, it could potentially provoke a sense of anxiety for some. That being said, at its best it was very cerebrally stimulating, energizing, focus enhancing, and could inspire creativity. Over consumption would definitely bring about a stoney haze that could keep you weighted in your seat.  It ran the spectrum of classic THC effects but with a quickening intensity.

One thing to note is the amount of seeds and stems in this eighth of Island Sweet Skunk X Sour Diesel. As I worked my way through this eighth, the seed count grew higher.  The bud was in good condition and the cure was decent…and the effects were quite nice…I might purchase Island Sweet Skunk X Sour Diesel again from gLeaf but I would really hope that it would be sinsemilla when I do. I say this on the cusp of reviewing Cookies & Cream by gLeaf, which also had the same issue…Comments are welcome.

SOUR DIESEL?
Sour Diesel is a very generalized designation, as I understand it. And, there are several different variations most likely. There are at least 3 types of Sour Diesel that have been officially identified and documented with empirical lab data differentiating chemical profile, Sour Diesel A, B, and C. This article at Leafly.com explains this and details the differences between them quite thoroughly. Check it out.
So, who knows which ones have crossed my path, if any legitimate at all.

But…it seems to me that ,based on that data, the Sour Diesel in gLeaf’s Island Sweet Skunk X Sour Diesel is most likely Sour Diesel A. But, I could be incorrect about this.
Sour Diesel A which is recognized by its Limonene dominant profile. The Limonene in this batch is 54% and definitely the most abundant terpene on the label.   As the stated in the Leafly.com article:

“The first chemical expression consistently found in lab data—what we’ll call “Sour Diesel A”—is limonene-dominant, followed closely by an abundance of caryophyllene and myrcene. Though these are the three most prominent terpenes, this chemotype is also influenced by linalool and pinene.”

And this batch is consistent with this for the most part.
***More on Sour Diesel when I finally get the opportunity to try some in Maryland.  CHECK BACK FOR NEW STRAIN REVIEWS