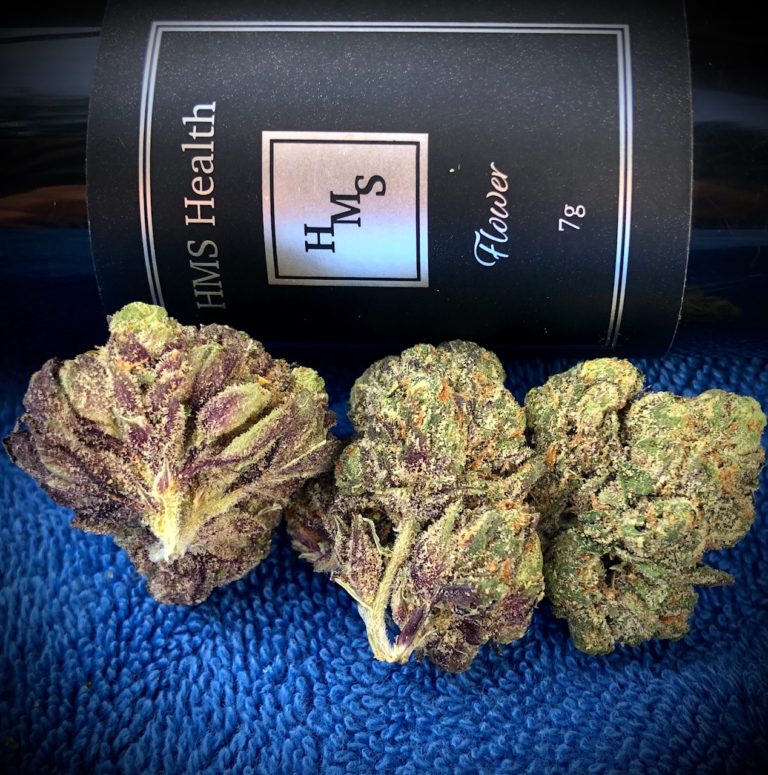 STRAIN: Bully Kush
PRODUCER: HMS Health
MEDIUM: Flower
POTENCY: MED-High (THCa 26.8% /THC .37% total terp. 2.55%
PRODUCER: HMS Health
CLASS: Indica Hybrid*
*HMS labels this a Sativa – AND upon inquiring with HMS they explained to me that it is “just a back cross of Triangle Kush”  …ok fair enough I say…comments?

“I would characterize Bully Kush as an Indica that thinks it’s a Sativa and convinces you of the same.”

MUSIC TO LISTEN TO WHILE MEDICATING: King Tubby, Run The Jewels 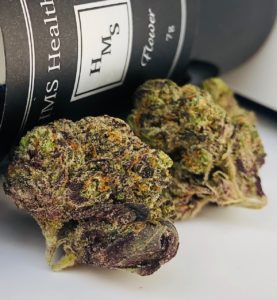 APPEARANCE (consistency) :
Bully Kush is very visually appealing. The beauty in its optics can be found in the deep purple hue of the leaves contrasted by a dark forest green. The buds are small to medium sized, considerably dense. It resembled something between Aliens on Moonshine x Sacajawea and Royal Wedding Cake or Cake & Chem in looks and consistency. 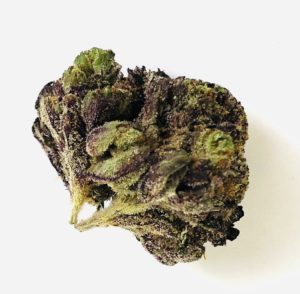 Good For Bowls and Rolls:
Grind for best results. Although not like the ever hardening consistency of, say Pie Crust by Grow West, Bully Kush needs some help to become spliff-worthy 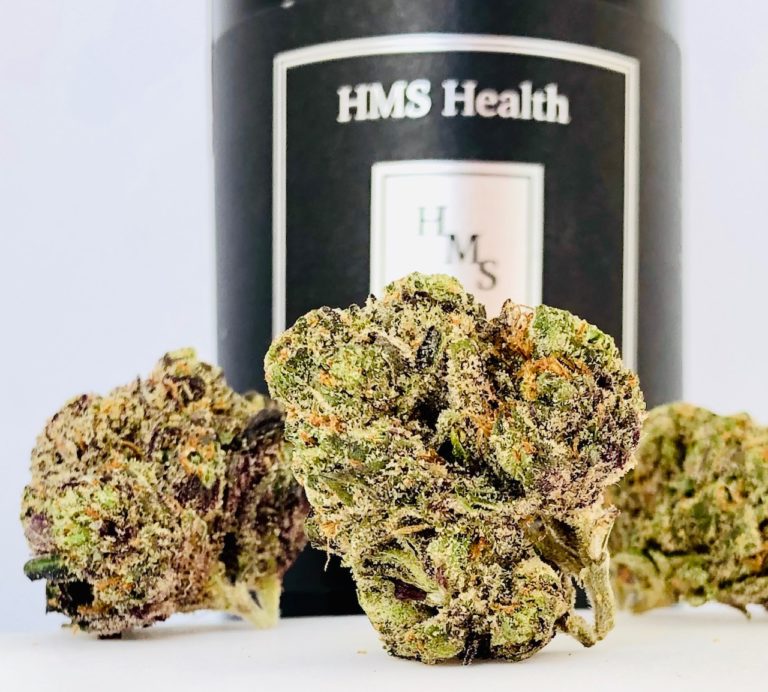 *I have encountered this with another HMS strain in the past. It was Star Duster, and although I rather enjoyed its effects, the smell of chestnuts and what seemed to be some dust or mold on the surface made me a bit concerned.

I emailed HMS regarding this and sent them close up photos of what I thought appeared to be clouded trichomes along with my best written description of the chestnut aroma.Long story short I was told nothing was wrong from their end (HMS) but was offered a replacement by Mission dispensary. The next time I returned to Mission it was brought to my attention that they had received a call from HMS. I was told, in so many words, that I was not the only patient to express concerns about HMS’ curing process for its flower.

So, even though this is mostly anecdotal, I think it’s worth sharing. And, to be clear, if something was amiss, it wasn’t fault of the dispensary. It is pre-pack and they are simply the retailer. They were in fact extremely responsive, understanding, and more than eager to replace the product. But, I didn’t request a refund or a replacement.

I simply decided to NOT post the review for Star Duster …Either way I think it only fair to post the Star Duster review in the very near future.

I simply decided to NOT post the review for Star Duster. Mostly because it would’ve been difficult to avoid the subject of the chestnut/ mildew aroma. I bring this up now finally Bc the Bully Kush seems to have the same chestnut-like /mildew-like aroma.How is that possible unless they are related? And does it point toward improper curing? Is it simply a terpene compound that creates this scent? Either way I think it only fair to post the Star Duster review in the very near future.Comments? 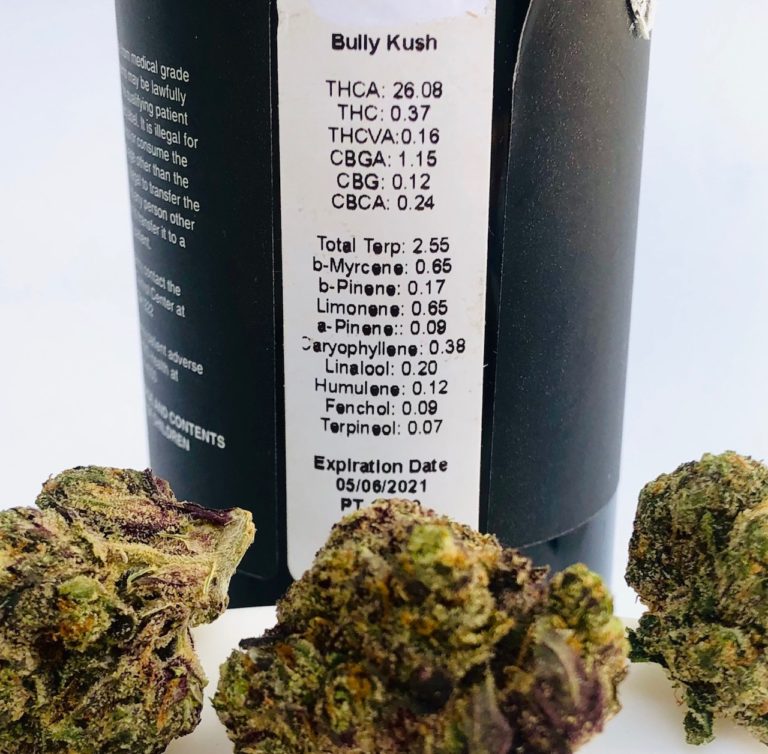 A CLOSER LOOK INSIDE:
Although the lineage of Kush here is unmistakable the amount of psychoactive stimulation was surprising but not wholly unexpected since I am aware of its parents’ propensity to ignite creative thinking and stimulate conversation. I would say Bully Kush has that times two. There is an enhancement of awareness or an alertness that I think is partially attributable to the percentage of caryophyllene at .39%. Also the limonene in this particular batch  and I suppose, to a lesser degree, a-Pinene as well as b-pinene.
I would characterize Bully Kush as an Indica that thinks it’s a Sativa and convinces you of the same. Pretty cool. 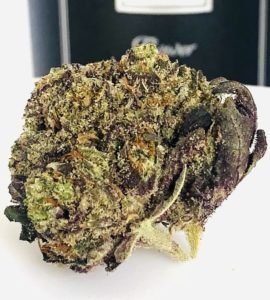 Bully Kush strain by HMS Health is an Indica dominant hybrid back cross of Triangle Kush that provides some decidedly Sativa-like effects such as cerebral uplift, sensations of mental clarity, and an alert and focused euphoria. The cumulative effect develops into a potent and “stoney”body high characterized by stress relief and a general feeling of mental and physical euphoric relaxation.
I would purchase Bully Kush again, hopefully without the aroma of mildew or acrid chestnuts like this batch of Bully Kush but I suppose there is no way to examine prior to purchase at least for awhile.

I really enjoyed the effects: the enhancement of focus, the mental clarity, the creative inspiration, and the potential for more meaningful social interactions were all notably present and positive. I’m also curious if another batch would smell differently. One can only hope.
I would characterize Bully Kush as an Indica that thinks it’s a Sativa and convinces you of the same. Pretty cool.

THE LONG WAY HOME (My Toke…)

Having tried two HMS products and experiencing the same chestnut -mildew aroma I have to wonder what it is in their curing or packaging process that causes this off-putting odor. I mention packaging because besides the odor, the 1/8 Star Duster (my 1st HMS acquisition) was improperly labeled as “Kief”(?)...Kief it was not…which was fine because, well, that’s not what I wanted, ordered, or expected to receive.

But, it does raise some speculation that maybe standards could be a little higher at HMS. In the age of Medical Cannabis, mis-labeling, at least, is worth some concern.

This batch of Bully Kush (1/4 oz) although properly labeled as “flower” seems to also have gone through whatever it is that produces the same strange aroma.

HMS categorizes Bully Kush as a Sativa. After calling and inquiring, HMS stated Bully Kush was simply a “double” back crossing of Triangle Kush, which is an Indica dominant Indica/Sativa generally considered to be 85% Indica (unknown) And 15% Sativa (unknown). So, some Sativa traits should be expected. I think the HMS employee meant But, while HMS’ characterization of Bully Kush as a “Sativa” is somewhat heavy handed, it does have some very finely tuned Sativa-like effects. One thing is the enhanced level of alertness and focus that can be felt and used quite functionally amid what feels like a classic Indica body high.
Myrcene levels aside this is quite a heavy hitter. The word “stoned”comes to mind.
I would say I was pleasantly focused and willfully sedated: I could have involved myself in more activities but elected to watch The Wild Bunch from beginning to end ..no breaks.

The first day, which was an evening , when trying Bully Kush, I was very productive between the hours of 8 PM and 12:30 AM.
In order to experience a pure experience with this strain, I decided to begin the very next day with Bully Kush. 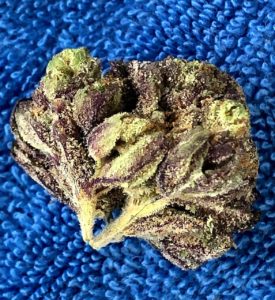 I did detect a certain cumulative psychoactive effect meaning; the more I ingested, the more I experienced sensations typical of Sativa strains like a sense of uplifted euphoria, a tendency to be introspective and/or to focus intensely.
So, I wouldn’t say it is a typical “Kush” Indica because I definitely felt some very classic Sativa effects. It is definitely a strain who’s effects seem to reveal themselves with a cumulative effect: the more you ingest the more intricate or complex the high. So, that being said, Bully Kush can be somewhat modulated to your situation whether it’s a morning or evening session. It is an interesting strain with a complex set of effects which ultimately develops into something very relaxing devoid of stress. 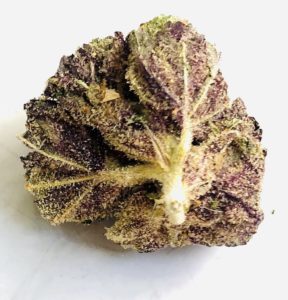 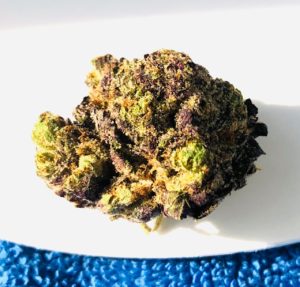