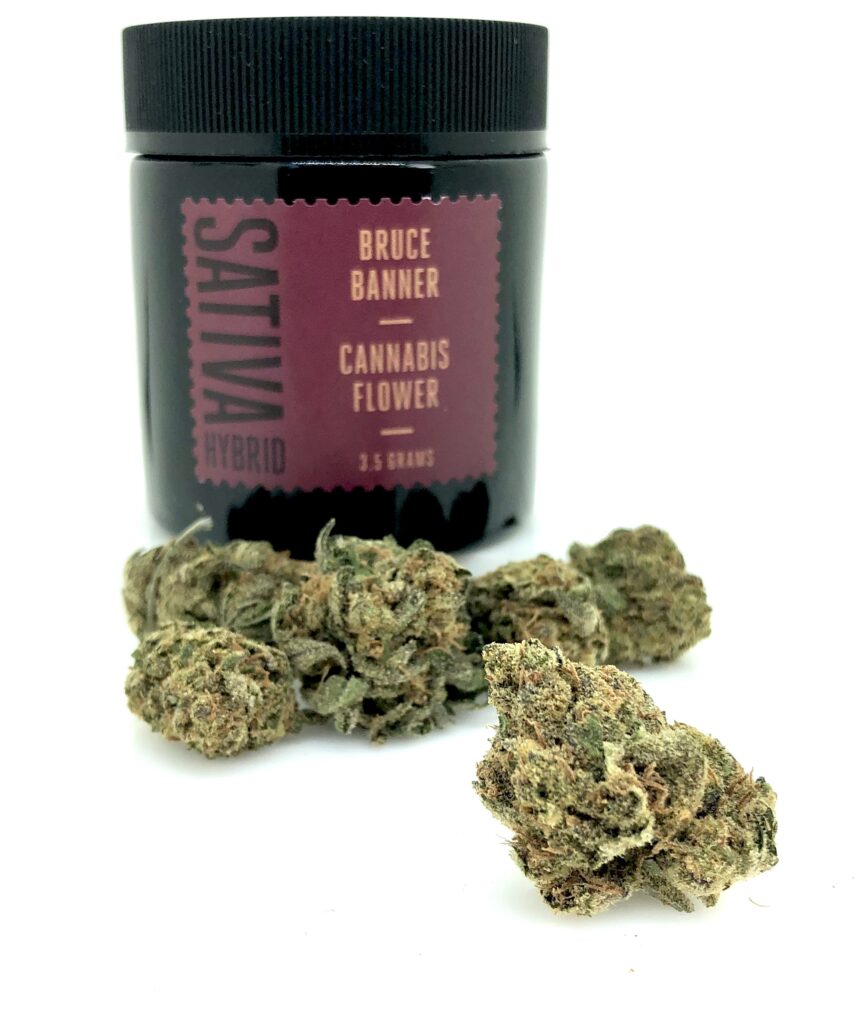 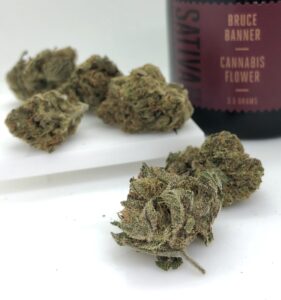 EFFECTS (MIND + BODY)
Stoney kush-like overall high with highlighted peaks of cerebral intensity sparking creativity and enhancing mental focus (most likely from the Diesel genetics )in micro to medium doses;but tends to settle into a stoney high at higher levels of ingestion but not at the sacrifice of diminishing mental focus. This serene calm yet pinpoint-focused head space is quite conducive to crafting and creative endeavors as well as long investments of time in more vicarious pleasures such as watching movies etc.
Very much like a Florida Kush combined with a focus-enhancing Diesel that keeps rolling down the tracks at a steady productive pace.
MIND; 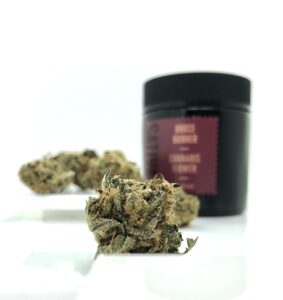 APPEARANCE:
Bruce Banner seems to show its Lemon Thai and Afghani influence on the cuff presenting large bulbous densely packed buds that hold aromas of honeyed-spicy-Afghani Hash.
The leaf and bud material is dark green with veins of darker lavender along edges of trimmed sugar leaves.
This mountain troop fatigue green when balanced against the light orange and yellow pistils provides an almost golden brown appearance at times.
You could drop this bud and it seems like it wouldn’t spill a trichome.

Good For Bowls and rolls but better for bowls and vapes me thinks.
To get the most out of tightly wound Bruce Banner use a grinder.

INHALE;
a bit harsh on the inhale – very sharp acrid diesel-like
EXHALE;
A lingering diesel-taste/ edge to its overall palette but with definite notes of a Afghan hash and spice.

PACKAGING:
I dig 1937’s cardboard-industrial faux roadwork box – seems like an effective way to create an artistic brand while lowering costs.
The opaque black glass jar within that actually holds the herb is nice – and it seems a bit thicker than the first time I encountered one (different story -different post)…let’s just say …crash.
Sunlight can only weaken and degrade cured cannabis so the dark jar, in this “case” glass unlike Kind Tree’s whose is plastic, but still better than any that are clear, Anyway, this dark opaque jar provides the best most preservative home for your flower. 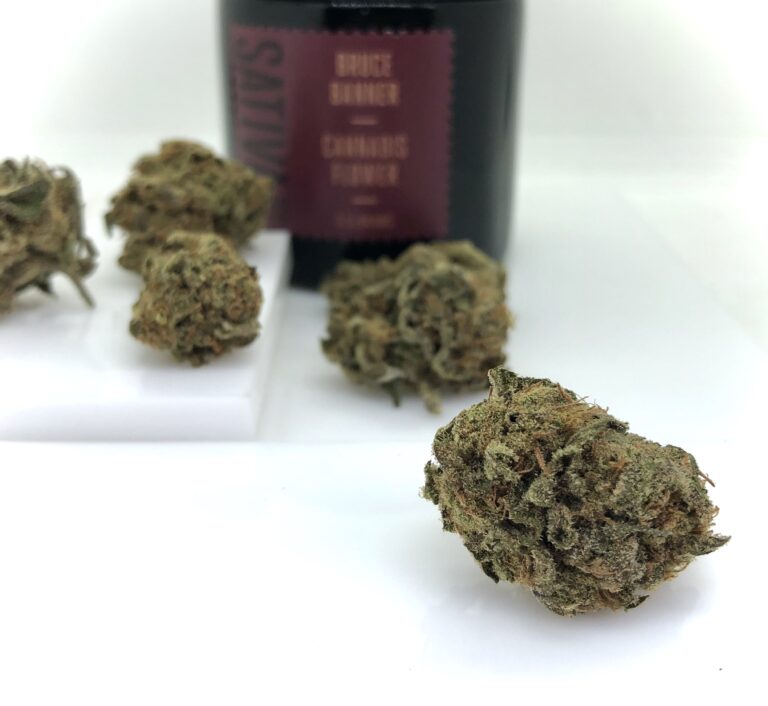 …in micro doses (Bruce Banner) can compete as a morning-daytime choice; it will definitely imbue some creative stimulation and augmented focus. 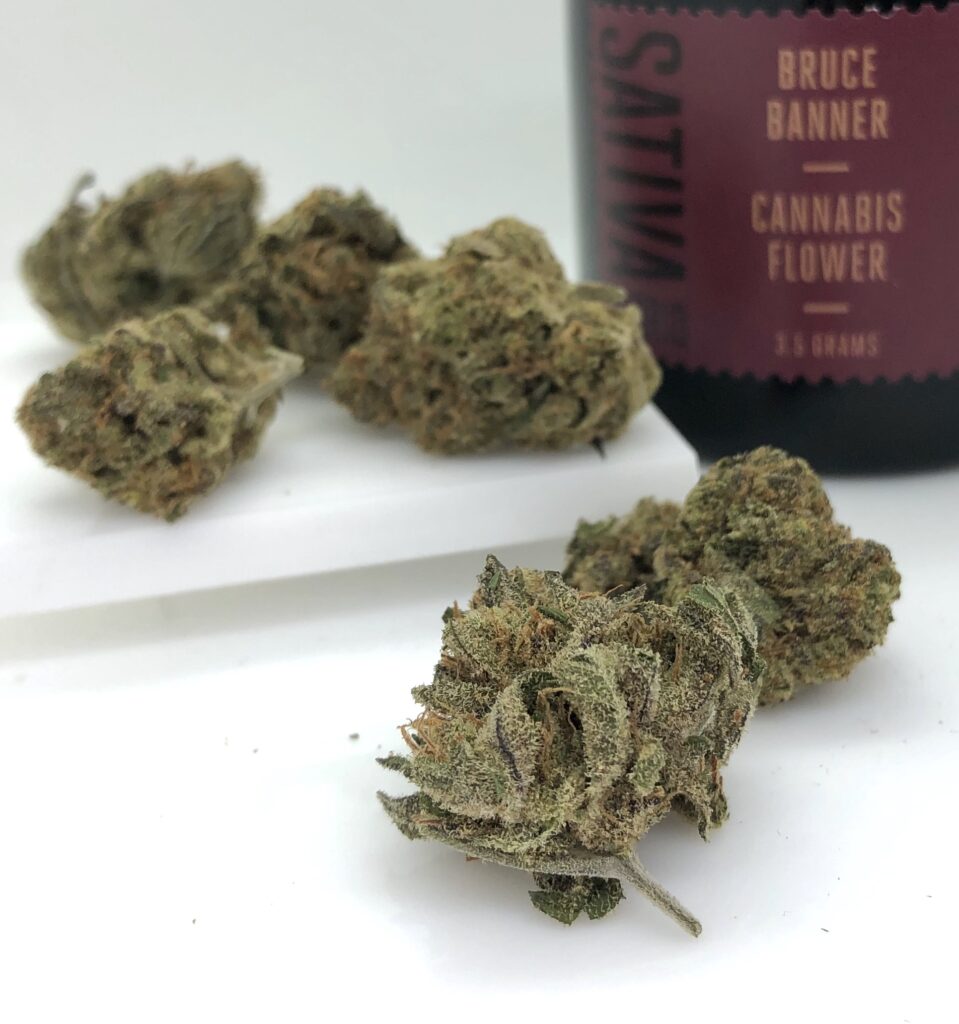 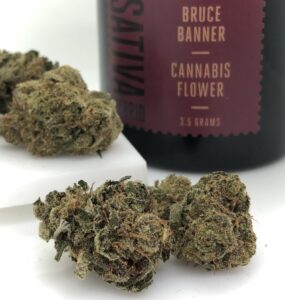 Bruce Banner is hybrid of OG Kush X Strawberry Diesel, named in reference to the metamorphic changes that turned unruly havoc-wreaking and emotionally reactive SuperHero, “The Hulk” back into the “ mild-mannered” and calm scientist, Bruce Banner.
Known for its superhero-sized high potency, and its aforementioned ability to calm frayed nerves and diminish stress, Bruce Banner has become synonymous with a powerful THC high.
Ideal for calming nerves, dispensing with residual stress, and providing cerebral and physical euphoria and relaxation, Bruce Banner’s high, in micro-doses, is quite conducive to creative endeavors and activities that require higher levels of focus.
Banner’s body high is one of serene calm and Stoney rather than sedative; tending to fortify its more heady-focused cerebral effects.
However, higher doses or repeated sessions will evoke sedation and eventually the urge toward restful sleep.

Bruce Banner is an interesting flower. For one thing it does tend to calm nerves. And even when combatting minor aches and pains, as well as nausea, it seems that it can elevate mood enough to distract the mind the very least.
The interesting part of this is that Bruce Banner is a strain that can be modulated to suit your needs. I say this because in micro doses it can compete as a morning-daytime choice; it will definitely imbue some creative stimulation and augmented focus. 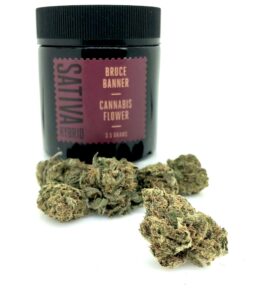 However, it doesn’t take much beyond a micro dosage to make Bruce Banner turn into a sleepy Hulk. There is a tipping point, that unless experienced in hanging out with Bruce Banner, one could easily misjudge and end up in a zombied state of sorts; some loss of balance, but more a lack of energy and inspiration to do anything about it.
That being said it is somewhat important to know who, or what you are dealing with; nimble-minded- frenetically-charged and hyper-aware Bruce Banner, or the lumbering staggered Stoney daze of the Hulk. 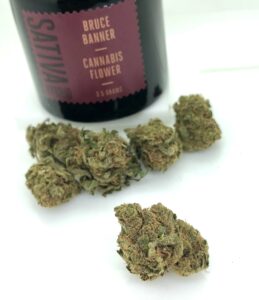 I would say depending on tolerance, you’re more likely to end up with the Hulk at least with 1937’s Bruce Banner as it seems to be carrying a heavy load of Myrcene; enough, in fact, to make Bruce Banner some of the most sedative medicine I’ve ever had. Like a thief in the night, one toke over the line and without warning, Bruce Banner’s cerebrally invigorated head-high drops off and its Myrcene Bomb disperses; releasing a wave of crushing sedation.
So, all in all, 1937’s Bruce Banner is best used as a late evening – nighttime medicine because of the level of sedation it has onboard. However that’s not to say it can’t be applied to other situations, but if you are trying to awaken your mind and keep it an active pace, micro dosing with Bruce Banner is the way to go.
Along with my preconceived notions of Bruce Banner’s efficacy lowering raised hackles, 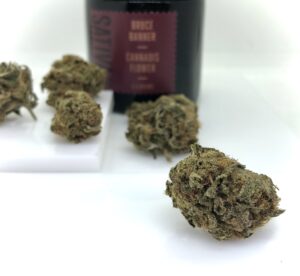 I also expected it to be much more green. If you notice, it has a distinctly brownish appearance. I would have to see another batch of 1937’s Banner to compare, but it definitely seems as if they let this batch cure almost too long, as it’s trichome content also reflects a more amber hue, indicating their narcotic effect.
Aside from the massive Myrcene content, the level of Terpenolene is also quite high, which to me means even more of a spacey feeling. This Terpenolene-Myrcene combo is fairly hard hitting and builds a case for 1937’s Bruce Banner to be relegated to before bed.
I’m looking forward to trying this again to compare.
All in all, it Bruce Banner can offer some increase in attention in small doses, an elevated talkative mood in medium doses, and fully sedate with higher doses.