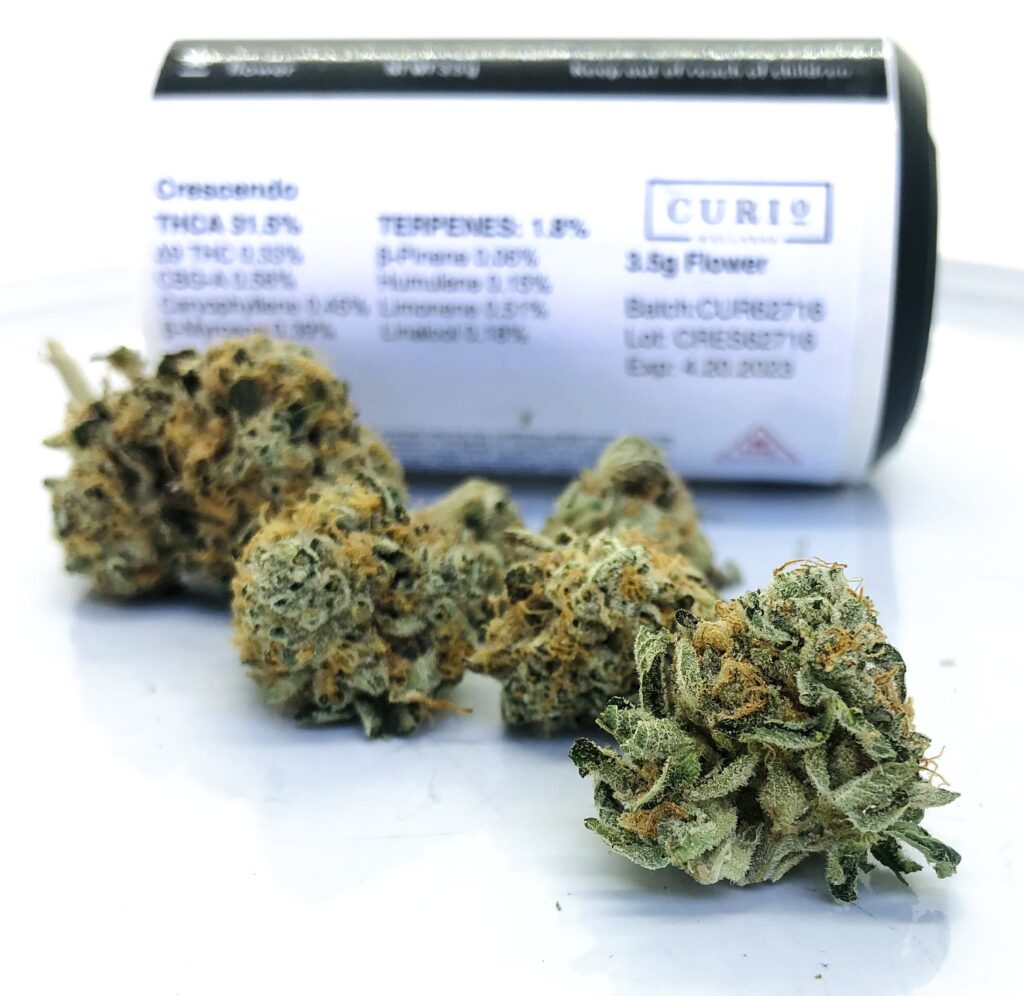 Crescendo is the result of a two step breeding process that begins with i95 (a descendent of Chemdog)x ChemD (itself a Chemdog pheno) and then the offspring is bred with Mandarin Cookies. 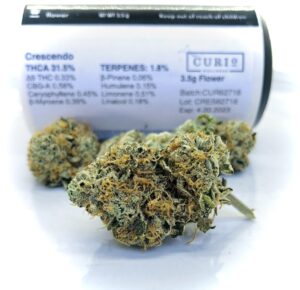 Much like its name suggests Crescendo’s effects creep, or ramp up slowly, its Chemdog influence is expressed first with some ocular pressure and a weightless physical sensation but then the intensity increases as the the more cerebral side of its high begins to peak through. Almost like a growing spiral of concentric waves, the more heady side of its effects seem to never completely disappear. from a cerebral stimulation, mood elevation, and an increasingly sedative body high that culminates to a point of physical and mental euphoria that can you leave you somewhat somnolent but not sedated , and yet still focused just with a bit of a narrower scope. Think long hand held periscope.

Crescendo’s effects creep and build in intensity. And there  is a definite uptick in cerebral stimulation that seems to creep to the edge of a feeling that may be unpleasant for some. Because of this, and despite the fact that the level of alpha  and beta pinene is fairly low, I believe Crescendo should approached with this expectation and for those those with a lower tolerance or new to cannabis, with caution. It is important to remember that even though there is a delayed onset the overall incline of effect is quite steep. The following effects are not listed in any any chronological order.

Crescendo showcases showcases light green buds that are mostly conical and spade-shaped and seem to be emulsified by their density. This is contrasted by tangles and clusters of rusty orange stigma, with shards of purple and lavender smattered throughout the green buds which are all covered in a sticky coating of sparkling trichomes.
Good For Bowls and Rolls: quite suitable for all but I found best with a pipe or bowl rather than rolling it- maybe it was due to the now-included terpene pack but the 2nd eighth I purchased was almost to gummie to roll with upon first opening.

Aromas of herbaceous lemon, hash, and sandalwood invade the nostrils and the exhale is replete with notes of hashish berries and pine with just a hint of chemicals
Crescendo’s aroma is definitely not the draw as it is subtle at best and I found somewhat difficult to capture at the time – here’s what I detected for that was present in all three different batches of crescendo. 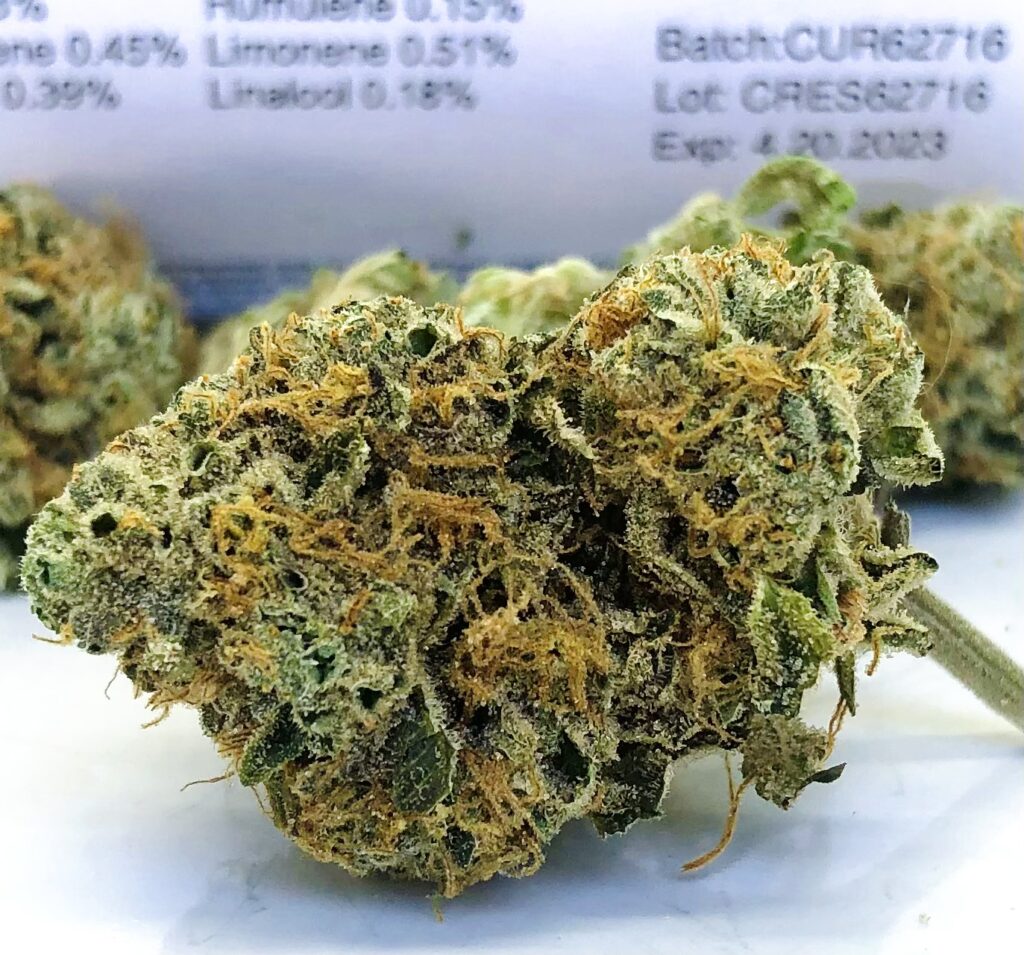 A CLOSER LOOK INSIDE Crescendo…

The almost 1:1:1 ratio of Limonene, Myrcene, and Caryophyllene create a balanced synergy providing Crescendo with its upwardly mobile effects. The fact that Limonene is leading the charge and not Myrcene is significant. If Caryophyllene were to remain 2nd and Limonene and Myrcene switched places in rank, I don’t think the high would have the same reoccurring intensity. It may be more sedative. In my mind The high levels of limonene keep the engine on and running with the Caryophyllene balancing out the high with a soothing backdrop.
Low levels of Pinene can insure a smooth stress free ride for most. However it’s to be noted (and explored later in an upcoming post on terpenes) that Pinene is a derivative of Limonene and Limonene aside from its mostly positive effects can cause some anxiety. I would say in Crescendo’s case at least this batch is this is not a concern. 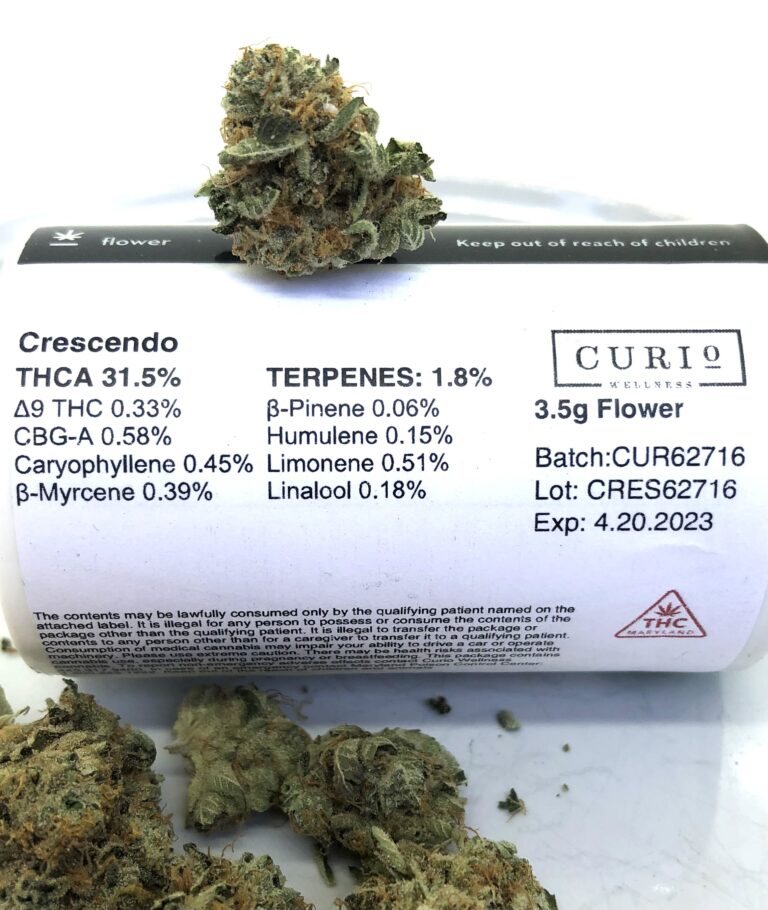 Crescendo is the result of a two step breeding process that begins with i95 (a descendent of Chemdog)x ChemD (a Chemdog pheno) and then the offspring of this union is then bred with Mandarin Cookies.
Crescendo’s top shelf breeding is matched by equally robust optics showcasing dense fattened spade-shaped buds with a rich landscape of green contrasted by clusters of to bright orange stigma, with shards of purple and lavender smattered throughout the green buds which are all covered in a sticky coating of sparkling trichomes.
Aromas of herbaceous lemon, hash, and sandalwood invade the nostrils and the exhale is replete with notes of hashish berries and pine.
Much like its name suggests Crescendo’s effects ramp up from mood elevation to cerebral stimulation, to an increasingly intense body high all of which culminates to a point of physical and mental euphoria that can you leave you drowsy, and yet still focused, positively introspective, and aware.

THE LONG ROAD HOME… (My Toke)

From the initial hint of incense and hash upon the buds break up to the deeply fragrant almost chemical musk of its exhale, Crescendo’s Kush appeal is more than apparent.
However its overall effect is like a Trojan horse: it waits, it is received, and then it reveals what it truly holds.
On the surface it looks like any number of Chemdog crosses and in fact you can see a bit of the Mandarin Cookies in there too- even when you receive it, or take a hit ; that hash laden Kush Indica vibe is still hanging around, then slowly as the effect creeps in its onset, it reveals a deeper cerebral side to its character and not only that it seems intent on climbing to new heights of expression until a union of mind and body completely take over rendering you helpless to its sway.

This bud is strong, I had gram that was tested at 23% and an eighth that 31% and depending on the time of day my tolerance and a few other factors became indistinguishable at a certain level of ingestion. I’m not saying the 31% wasn’t stronger but the 23% was closer with less of a disparity than you’d imagine. 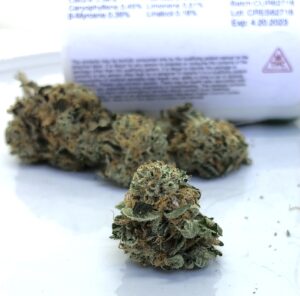 The genetic recipe that bears Crescendo reveals an ancestral leaning toward predominantly Afghani- Kush Structural Indica varieties. The influence of its ChemD and i95 side of the family is present in Crescendo’s optics, it’s aroma and flavor profile, and indeed supports at least 50% of its effects in micro doses and offers a lush and languid stone in heavier doses; all the while retaining its lofty cerebral side.

The Mandarin Cookies influence is less obvious when first medicating the Crescendo but as the high continues there is no doubt that the re-occurring waves of focused inspiration can be attributed to its input. Crescendo’s Mandarin roots bring a dose of Durban Genetics onboard which seem to have a reoccurring cameo role in the epic Crescendo.

All in all Crescendo delivers a mind and body high that can part the waves of stress while it elevates the mind and body to new heights of carefree yet focused euphoria; allowing the mind to wander into detailed distraction and away from any recursive negative thinking. The effect has a creeping nature that seems to climb in concentric circles of sensation until the spiraling folds under its own weight but at its apex not at its origin; like a mountain lake or a pool on the roof of a sky scraper, crescendos high climbs to its peak and levels out to an all over body high like a tranquil mountain lake and transmutes into a placid all over body high which can settle the once parted waves of stress into a high elevated pool of calm delight.