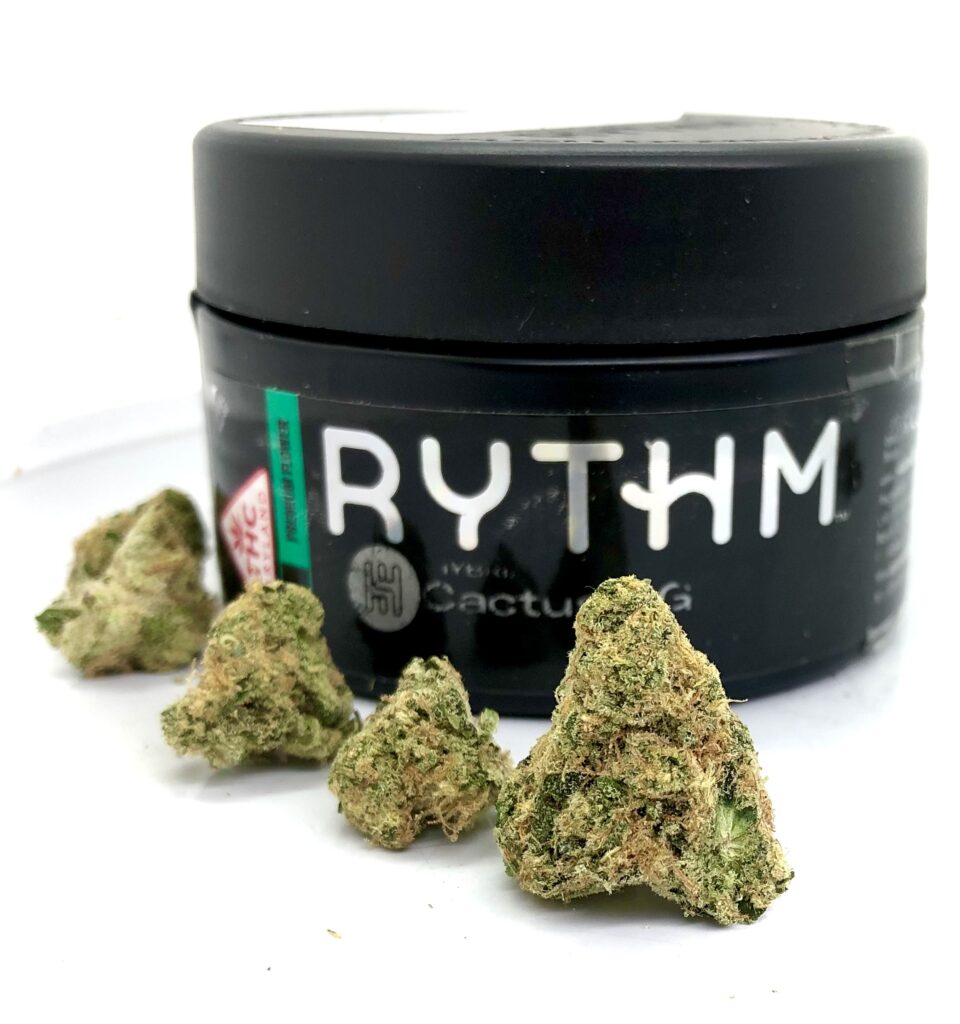 AWARDS: 1st place at the High Times Cannabis Cup in 2012 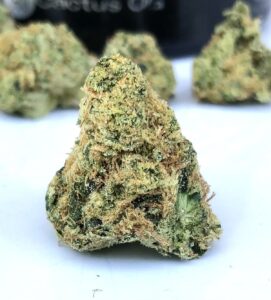 Cactus OG’s effects are more complex, and actually more cerebral,  than its lineage may seem to predict. One might presume that breeding a pure Indica Landrace strain, the Afghani, with the notoriously narcotic Northern Lights, would yield an equally sedative result.Cactus OG delivers a complex set of effects which seem to occur in an unpredictable order much like the branches for desert succulent which shares its name.

*NOTE:
Some my find the increased rapidity of thought to cause or exacerbate Anxiety. 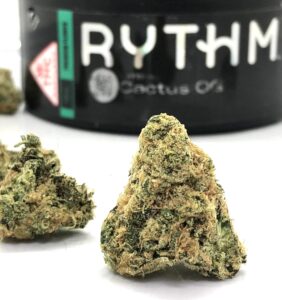 With Limonene rather than Pinene supplying Cactus OG’S cerebral energy, those dealing with symptoms of Anxiety or panic attacks may find some uplifting relief medicating with the Cactus.
This goes for Patients combatting chronic pain and depression. Cactus OG’s wide ranging effects can potentially speak to both psychological and physically issues.
Part of the reason for Cactus OG’s precipitous sedation is its high level of CBG (2.65% | 0.40%

Note:.
Can help mitigate or alleviate. some symptoms associated with:

“Cactus OG’s effects are more complex and more cerebral than its lineage may seem to predict.” 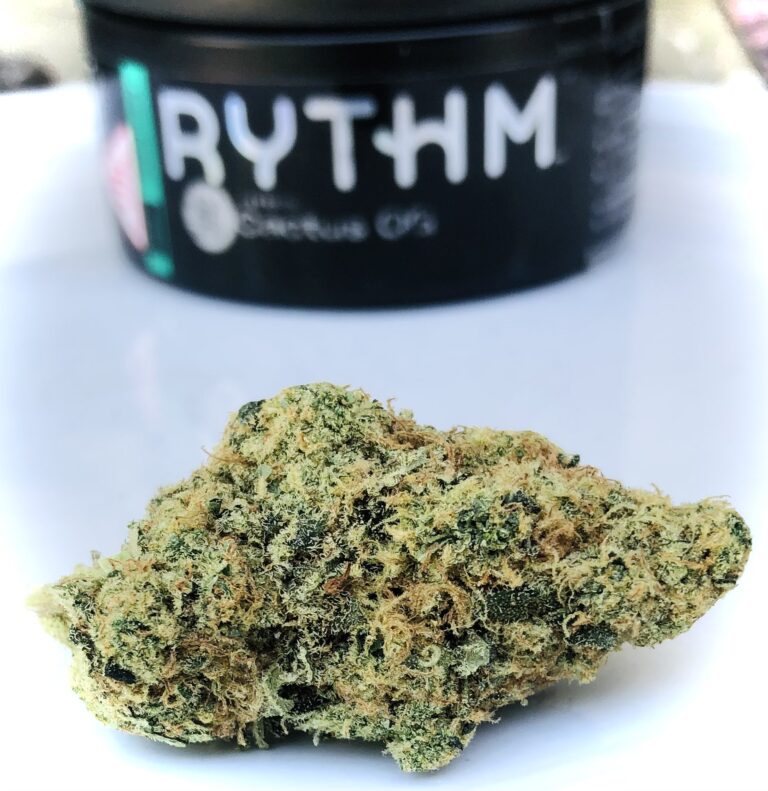 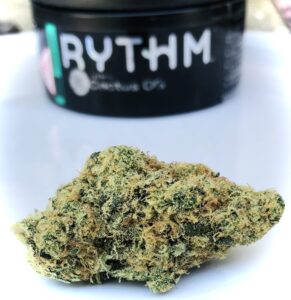 Cactus OG’S Afghan genetics are more prominently expressed through its effects than its optics. That being said it does inherit some of the more appealing attributes of Northern Lights with its dense structure and long comical buds.
Buds are mostly a saturated green. Trichome coverage is more evenly distributed between clear cerebral affecting trichomes as well as milky to cloudy sedation-signaling.

The Cactus OG high can impact the mind intensely at times but never for long; it is as if a distilled expression of both parents’ more cerebral effects randomly yet prominently peaks through varying waves or layers of physical euphoria, which also seems to emerge into prominence and then quickly fade to the background as another cognitive spark ignites. 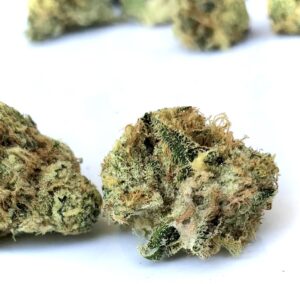 There is no doubt among those experienced with cannabis that NL and Afghanistan can offer more than a qualifying degree of psychoactive stimulation. Too often they are relegated to bedtime or in some way signal complete sedation to some.
Cactus OG demonstrates how complex and multi-faceted the cannabis and the breeding of cannabis can be.

Good For Bowls and Rolls? Not really. It seems the tightly wrapped buds of Cactus OG are better ground than pulled apart. Waiting a few days won’t matter either it seems as this bud is quite dense and resinous.
In bowls, after being ground, yes, very pleasant smoke or vape.
In a joint or spliff or blunt it gets a little hard to hit due to its high resin content 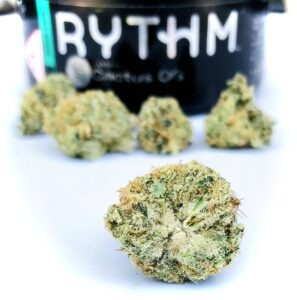 The aroma is sweet with notes of baked vanilla and deep sourness that seems to surround the aroma when the bud is broken up.
* Sweet skunky aroma
* Fruity / Fruit Stripe Gum
* Perfumed / incense
* Notes of chocolate and Hash

INHALE- inhale is mostly pleasant and a bit lemony
EXHALE-Cactus OG produces a thick and resinous smoke that has a bit of an astringent flavor. It is rather harsh considering this plant’s pedigree.
A dampened or mellow sort of frankincense type aroma with an undercurrent of skunk. Both of these are more perceptible in third person. Landrace pungent and sour sickly sweet honeydew aroma can be perceived at times

(Use this for testing article)
It would be great if Rythm used another method of displaying lab test results.
A lotto ticket offers 100 times the staying power than the (im guessing) laser printed method employed by Rythm. All that dram and then poof all the important info gone -and I will admit I actually like their containers- but the metallic silver lab results (THC and terpene info) as well as the lineage, which Rythm graciously supplied will be wiped clean simply by touching one time.
You’re best advised to only handle the jar with index and thumb on top and bottom as to not rub off the lotto -scratch style labeling provided by Rythm.
That being said their iridescent logo against the stark black of the jar does create an appealing optic…and one that is subdued yet stylish.
It can make me excited about the flower within at times.
I have to admit that, at least in my opinion, there is something tactically pleasing about the Rythm dram.
But it sets my expectations high. So, there’s that. And  when what is marketed as worthy of a jar isn’t worthy of a jar…I don’t think that works out well for either of us. They may disagree. Meanwhile, Cactus OG was NOT a let down anything but in fact…Just a bit hard to pin down regarding its flow or chronology of sensation. 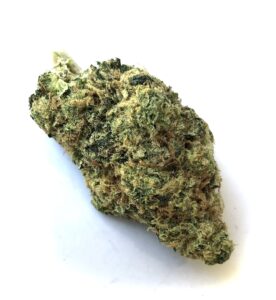 For starters the Myrcene is increasing the sedative relaxing qualities of Cactus OG as well as the overall potency at 0.93%.
It holds a 2:1 ratio with Limonene at 0.43%.
What I was most interested in here was the 1:1 relation between Linalool (0.21% and Caryophyllene (0.27%). Although probably unprovable, it has been my experience that any 1:1 terpene concentration, especially if it is above .20%, acts a a force multiplier for the combined effect; in this case tranquility of which Cactus OG can impart all day long. 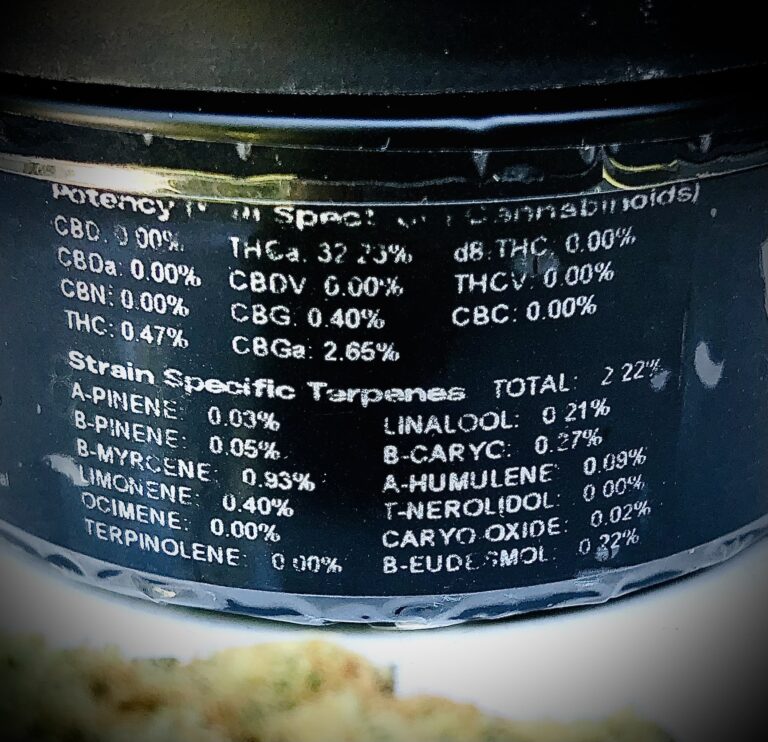 There seem to be just as many clear trichomes predicting a cerebral effect as there are amber or cloudy ones predicting a more sedative effect. One can see that Cactus OG may have varying effects based on the variance of trichome quality. 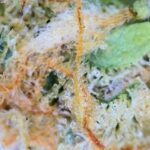 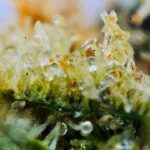 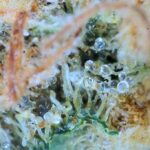 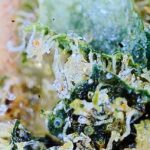 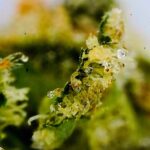 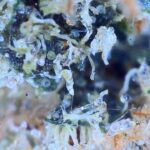 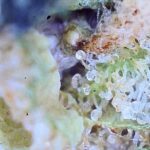 Cactus OG is the result of crossing to genetic giants Afghan X Northern Lights. While it may seem that this combination could produce nothing but a sedative effect, the Cactus OG high is as unpredictable and meandering as the prickly arms of its desert succulent namesake. With an herbaceous and spicy overtone that pitch its aroma and a somewhat hash-like exhale, the effects of Cactus OG take hold immediately with an influx of uplifting cerebral energy that although more prominent in the beginning, seems to continually trade places with Cactus OG’s sedative physical euphoria for the length of its high. This fluctuation of effect although interesting and more cerebrally focusing than one would predict, ultimately leaves one unmotivated, somnolent, yet intermittently mentally activated. 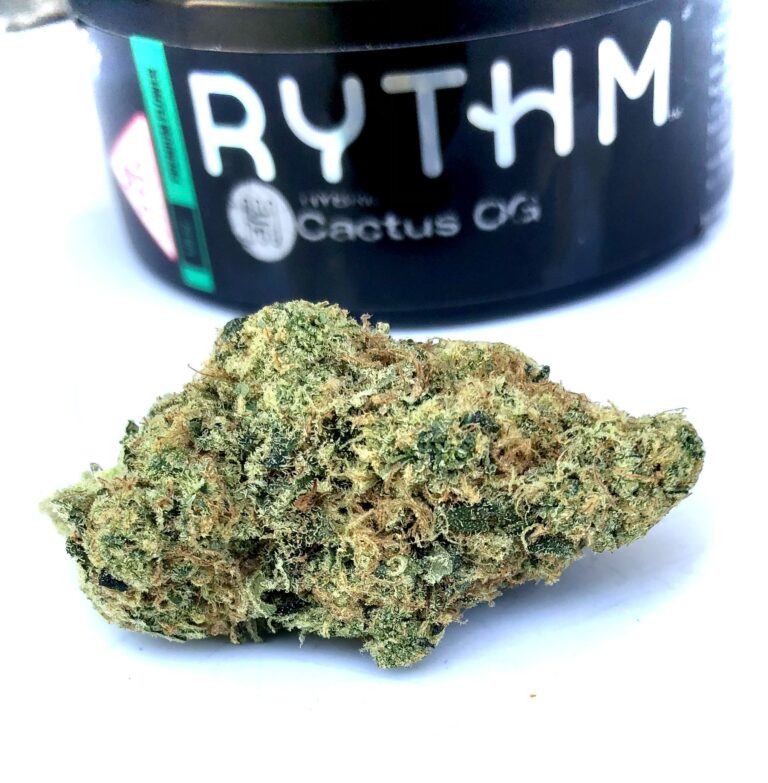 Cactus OG really it first made me doubt my own powers of observation.  At first, I  couldn’t quite seem to define its chronology of effects…or, at least how it was affecting me… it seemed that each time I medicated with it, no matter how consistent I was or as many times as I tried to repeat the experience…each time it seemed different depending on my own mood or physical state at least to some degree… with those I tried to be the outcome with the effects that I felt were somewhat different it almost seems like the effects kept going beyond me…and I was just checking in and out at different times… like jumping on a merry go round that’s spinning with no one on it….like if I exited the experience it would still continue  outside of my own senses.
Ok, I’m maybe I’m veering a little off track…maybe its the influence of the Cactus OG… 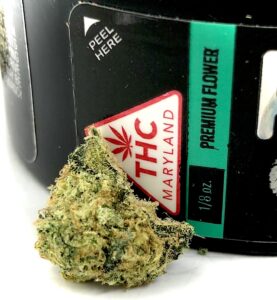 As far as the X factor in cannabis: that little extra something that helps some stand out from the crowd…and that you can’t define or link to any one terpene combo per se, THC levels, or reputation. Cactus OG seems to want to be this type of flower and seems to have the makings for it…although it just misses the mark short of motivating like a G6 or Durban Poison.
And, even though its meandering unpredictable high was a nice experience, for someone like me who needs to stay a bit on track and appreciates the utilitarian value that cannabis has in my life…well,..it wasn’t something that I could call a mainstay…

On paper, its pedigree may lead some people to expect a deeply relaxing mostly physical high which Cactus OG can indeed deliver, but which only describes one aspect of its wide ranging effects. plant, Cactus OG presents with a prickly skin analogous to its initial rush of uplifting cerebral stimulation which may push some to a safe distance. 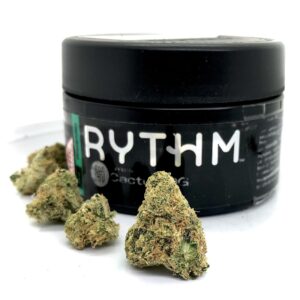 And, like its namesake’s ability to store a water supply concealed deep in its trunk for nourishment, Cactus OG conceals a reservoir of effervescent cerebral stimulation and euphoria which seem most prominent and functional when accessed through micro dosing; But, also seems to pop in and out of view even during the longest of sessions.

Whereas many hybrids present their more cerebral effects first and their more physical effects second, the Cactus OG high expresses its physical and cerebral effects at different times defying the typical arc of a cannabis high. It can meander much like the random and somewhat chaotic morphology of the
multi-trunked statuesque desert plant for which it is named.

Cactus OG’s effects fluctuate in intensity along the way. For instance, sensations of cerebrally expansive euphoria which present themselves in the initial onset  seem to pop in and out of frame for the duration of the high. Likewise, the more physically euphoric sensations can show up early–immediately after exhaling… a rush of cerebral floods the mind. This can be both mood elevating and possibly present some individuals with a sensation of anticipatory excitement. From there high begins to morph into more of a physical expression with warmth in the chest and a light ocular pressure.

As both begin to extend their reach the initial sparks of mental energy become more finely tuned providing a some creative inspiration and an increase in focus.
In its typically unpredictable fashion Cactus OG’S physical effects will eventually present their full weight but with little warning, leaving the mind engaged while the body is plunged into a state of tranquility and more often sedation...
Cactus OG will definitely leave you pleasantly immobilized and self contained even in medium doses; and there is no doubt that its powers of sedation are finely tuned and effective; but there is an undeniable cerebral bend here that seems to also arrive in waves of varying intensity.

In fact, the prickly skin on this cactus is its cerebral side which can be quite intense at time. This seems to be fueled by a high dose of Limonene which can inject an invigorating dose of cerebral energy and motivation and fortified with higher concentrations of Myrcene, which can enhance the strength of THC.

Cactus OG can elevate the mind and tranquilize the body… but seems to induce these states in too random of a frequency to be a strain you can count on let’s say…yes you can bet you’ll be high..you may even forget your keys or want to read an extra chapter of your book or finish that insanely movie…but you may also want to lie down in bed and close your eyes…only to be re-inspired but too unmotivated to do anything about it…So, It’s not a strain I’ll be repeating in my opinion…But, I’m happy I experienced it…