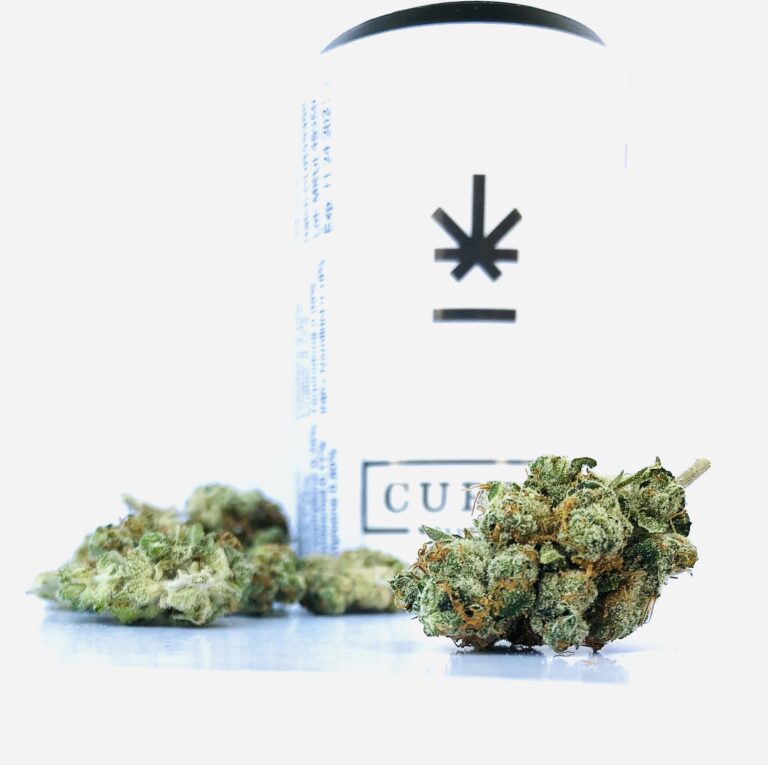 "...In higher doses, MK-Ultra can produce an overall mildly mind-altering, if not legitimately psychedelic experience, which is highlighted by, but not limited to, tangential and humorous thought patterns, time dilation, distortion of light and sound, and an overall feeling of disassociation...."

This was my 1st time medicating with MK-Ultra and it was a very nice experience. I think that it lived up to what I had imagined it to be capable of and maybe a little more.   It was a very potent batch and the effects were relatively intense for me.  It was definitely creatively inspiring and brought with it some enhanced concentration.

Most of the time I see MK-Ultra I don’t think it is testing high enough for me warrant the purchase. This time I figured between 25-30% couldThis batch, although testing higher than I’ve ever seen it displayed in the past, had a grassy aroma indicative of a less than ideal curing process.

An aroma, which unfortunately as of late I’ve been associating more and more with Curio’s latest batches of some strains. The aroma itself doesn’t bother me. In fact, I believe that I’ve mentioned in the past (in another review) that this slight grassy/ homegrown scent sometimes gives me a good nostalgic feeling. But, even though it doesn’t bother me much, I believe it is still indicative of a weak link in curing of this batch of MK-Ultra.
The weight seemed to be low based on firsts glance but I was remiss in actually weighing it on my scale, so I’ll stop there to be fair. 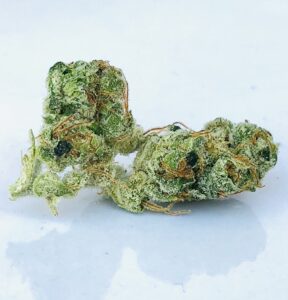 However, what appeared to be cookie-strain-type buds comprised of the spindly finger-variety and the occasional thin wafer-shape, were also extremely dry, brittle, and basically disintegrated with even the slightest manipulation. This made it rather difficult to work with and I found myself using an old style mini-glass-steamroller -bat to do one hits out of what looked like all of 2.8 grams in kief -sized dust.

My Girlfriend (MMCC card holder)  repeatedly commented that the smoke was harsh… it really leads me theorize that maybe Curio is experiencing or did experience a curing issue with MK-Ultra, at least this time around.

Sure, any one of these could mean most anything really …on its own… But, stacked together they do hint at some sort of disconnect…
at least this batch anyway.

All of that being taken into account, and now having been officially expressed, I will move on to the positive aspects of my first eighth of the infamously named MK-Ultra.

This strain really put me in a very nice headspace: I was a excited, I felt uplifted and funny, in fact everything became funnier much like when I medicate with Culta’s ‘92 Cookies ‘N Dream; everything just seems more absurdly funny or capable of being perceived in an incredibly humorous light.
Also, there was a definite, repeatable, sensation of cerebral and physical disassociation. I enjoy when I encounter this sensation and I feel it really adds a psychedelic aspect to the effects palette overall.
The G13 influence is unmistakably responsible for this as I’ve encountered this sensation in other G13 related strains such as Evermore’s Airborne Skunk.

Funnily, or maybe only funny to me and my MK-Ultra…my experience made me think about some of the Project MK-Ultra protocol…Like ordering a scotch at bar, but and not knowing that a CIA operative has dosed you with LSD without you without your knowledge or consent…

…sort of like purchasing a top shelf eighth of flower from a normally dependably quality-consistent company, but getting home and discovering something you hadn’t expected:  sub-standard cure, dry, spindly crumbing b, a grassy aroma, and a harsh exhale….without any knowledge of it, no forewarning, no consent…

So, I suspect, no, I know, that Curio can do better, and I’m sure they are well aware of what seems to be a disconnect or dip in quality control in the curing process as of late.

But, I will most definitely purchase MK-Ultra again and most likely from Curio, but I do hope it is at least reaches what I’ve come to observe as a consistently high benchmark.
I don’t have any past batches of MKU by Curio to compare this to, or by anyone else for that matter.

But, my experience with this batch tells me that maybe I’m NOT getting the best version of this incredibly popular and intensely potent strain? Comments are welcome. Let us know you’re experience with MK-Ultra.

I’ll be back with an update….hopefully after Curio updates its curing process. 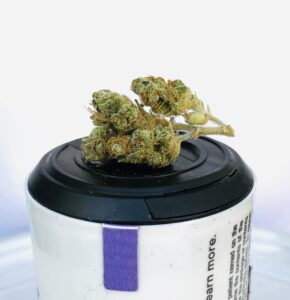 APPLICATIONS (MEDICINAL + RECREATIONAL)
MED;
Could help mitigate or alleviate. some symptoms associated with: 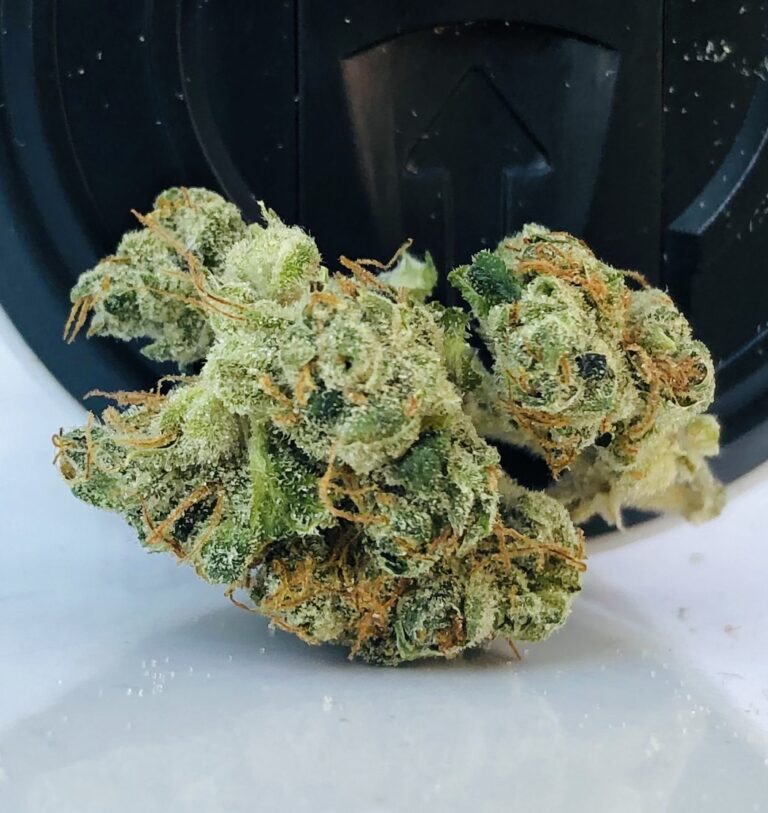 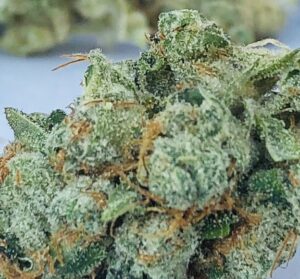 APPEARANCE:
This 1/8th seemed anemic from the moment I popped the lid. My excitement for trying MKU for the first time was able to override my initial impression of a compromised curing process bc of that undertone of grassy aroma that I’ve also encountered in recent batches of my favorite Curio strain, DSCT. In DSCT’s case the THCA percentage was significantly lower than previous tangerine heavy smelling batches.

In the case of MK, being that I’ve never seen it this high in potency, I don’t have much of a point of reference for its intended aroma. But, I was able to detect some of its more common aromatic palette, such as the aroma of burnt plastic.

This batch seemed too dry of a cure. I found it almost impossible to do anything with it except let it turn to dust between my fingers. Even in the Curio container, with very little jostling, it began to disintegrate quite fast. By the time I was at the end of what seemed to be a rather anemic looking eighth, I had what appeared to be kief only. Needless to say, this was not ideal, and I found myself going through the material at a faster rate than normal. Again, it felt good, it just looked and handled terribly.

There is nothing over the top here per se. It did seem like a great example of entourage effect as I believe they worked together well to bring about the effect.

As psychoactive as MK-Ultra is, I’m surprised there wasn’t any THCVA content found or at least it wasn’t enough to list on the potency/ terpene label. 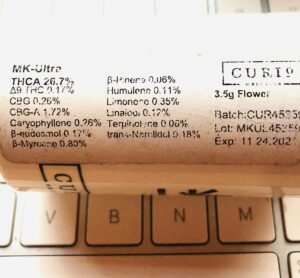 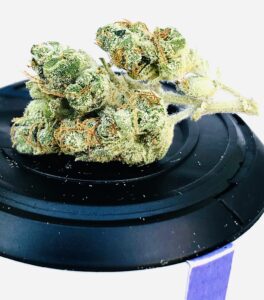 CONCLUSION:
MK-Ultra is a a very potent Indica hybrid created from crossing the legendary and infamous G13 strain X Bubba Kush, offering tastes and aromas of chocolate, pine , and burnt plastic. As it’s lineage (G13 ) and it’s name (the CIA’s infamous mind control program in the 60’s for which it is named) suggest, MK-Ultra’s psychoactive effects of should not be under-estimated.

Even with its heavy and tranquilizing Kush genetics and accompanying body high, there is an intense amount of cerebral uplift, enhancement of focus, and a tendency to be social and find humor in situations as things like perceived time, light, and sound may become subtly distorted or seems to beg for more attention.

In higher doses, MK-Ultra can, indeed,  produce an overall mildly mind-altering, if not legitimately psychedelic experience, which is highlighted by, but not limited to, tangential and humorous thought patterns, time dilation, distortion, or intensification of light and sound and an overall feeling of disassociation. 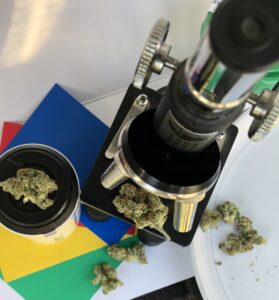 In the 1960’s The CIA had a healthy relationship with LSD, if not a very intimate one.

It was during their foray into mind control through the use of trauma and drug (LSD mostly) based mind control in order, among other goals, to create a Manchurian Candidate.

As many readers are already well aware, this was the C.I.A.’s Project MK-Ultra, which actually included a host of bizarre and cleverly, if not eerily named sub-projects which fell under MK-Ultra’s umbrella…Projects with names like Monarch, and Operation Midnight Climax.

This reference to Government shenanigans involving psychedelic drug induced altered states of reality and the use of hypnosis, most certainly comes from one of MK-Ultra’s parents, the infamous G13.

A LITTLE ABOUT THE G13 STRAIN…

Basically the story goes like this: During the early 1970’s, somewhere in an secret underground Government marijuana lab, a renegade botanist smuggled out a very special phenotype…Even if it is no more than Urban Legend, the story  has always delightfully intrigued me. And, the few experiences I’ve had medicating with G13 parented strains so far have been a considerably powerful.

For one thing, there is indeed some time/ space distortion which creates a sensation of disassociation for fleeting moments  and at irregular intervals). Also, sound and light were distinctly distorted, or rather enhanced. And, as the effects begin to fade, there is a hazy state of euphoria not too different from a type of hypnosis, at least self hypnosis.

Anyway, none of this G13 story can be proven but it definitely seems to have something to do with the naming of or inspiring the name of MK-Ultra.

Either way, MK-Ultra indeed lives up to its name as the amount of cerebral haze and neural firing that this strain seems to produce is phenomenal and when combined with Bubba Kush, it is slowed down to a very functional speed allowing for deep focus and simultaneous distraction from anxiety and depressive thoughts. These are replaced by a propensity to find humor in situations, and be able to perceive things from a removed point of reference that is both mildly dissociating and interestingly trippy – all while actually functioning… in fact, deeply focusing on the task, or activity, or sensation you are engaged in at the time. Definitely a “trip”… and maybe my new favorite strain.

One wouldn’t think of MK-Ultra as a good morning or daytime strain for functionality.
However, I found that it was almost perfect for micro dosing in the morning or afternoon. It has such a keen ability to remove any obstacle you may have in the forefront of your brain. It almost insulates you with its Kush body warmth and brings you to new mental landscapes with sparks of euphoric energy and creative inspiration.
If I had to pick a strain to wake up to, snowed in,  it would be most likely be MK-Ultra…this week anyway.

And the funny thing is, your mood is so improved that even if that MK-Ultra tinged snow day of movies is what you have planned,  but, instead you must tend to a task that takes you way out of your comfort zone…Well, then, MK-Ultra will still be good for your mood and help you keep truckin’ with a a fuzzy- warm upbeat focus that can’t be beat. 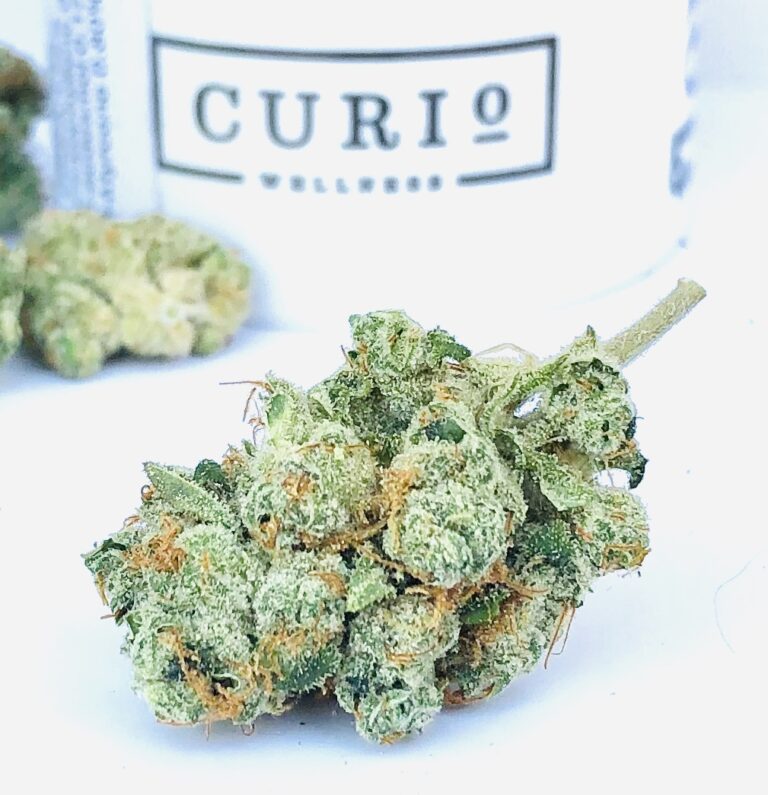 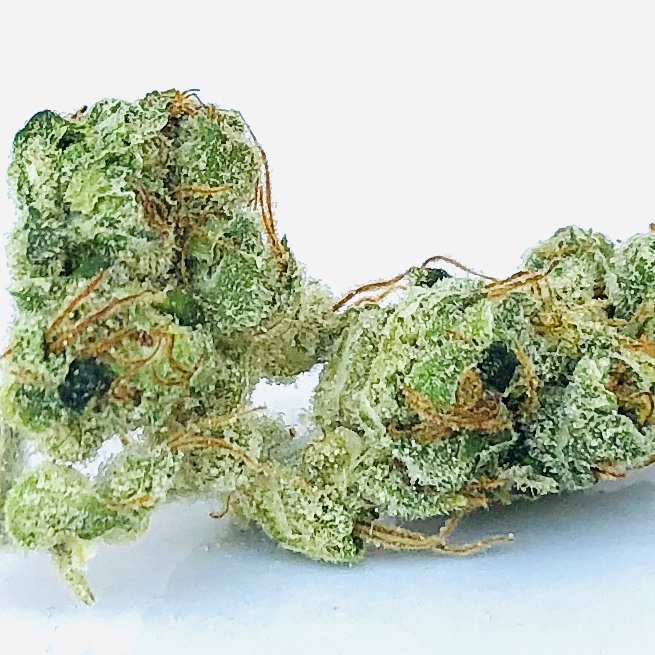