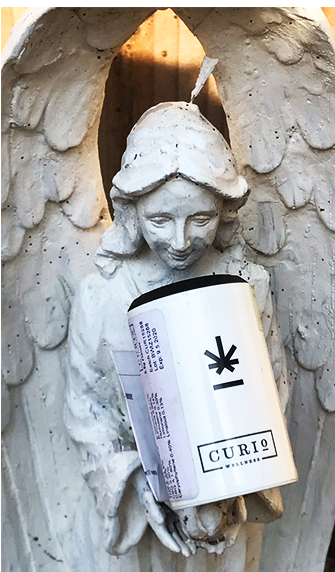 BODY:
SOME EYE PRESSURE
TERPENE MYRCENE WAS HIGH AND SEEMED TO HELP JOINT PAIN
COULD BE HAPPY ON THE COUCH BUT WAS TOO MENTALLY STIMULATED TO WANT TO
INCREASED MY APPETITE

NOTE: As it was related to me, this strain was the first strain to break the 30% thc potency range. And, because of this, gained almost immediate infamy.
And it lives up to it.   The batch I purchased from was well over 30% and it was very, very potent.

I would recommend this to anyone but I would say those new to smoking and vaping should take it slow with this strain… at least at first until you see how far the Wizard will take you.

Blissful Wizard is a very sweet, almost fruity..(fruitier than I would have thought, given its lineage being Captain’s Cake and GSC aka Girl Scout Cookies).

It is very refreshing and almost put me in a better mood just inhaling the smell from the Curio container.  It is one of those strains that smells so good you could eat it.  I got the distinct aroma of sheet cake and whip cream with cherries along with a somewhat pungent earthy undertone.

The first pull I took was at fairly low heat and my exhale was nothing short of “blissful”..seriously, a calm came over me due to an almost immediate body warmth that I sometimes feel with deeper indica strains.

1st pull/ hit/ sesh: after low heat was just unbelievably sweet and aromatic, with almost a cinnamon induced warmth rush.  The taste upon exhaling was a balanced sweet and earthy taste.

3rd pull/ hit/ sesh:  My 3rd finished off the bowl and my exhale produced an amaretto like taste of all things.  This was so different from previous hits and so pronounced that it was definitely worth mentioning.

The 1/8 oz I purchased at the Botanist was pre-pack from Curio Wellness.  The main calyx/ bud  in the group of (3 large ) was majestic. 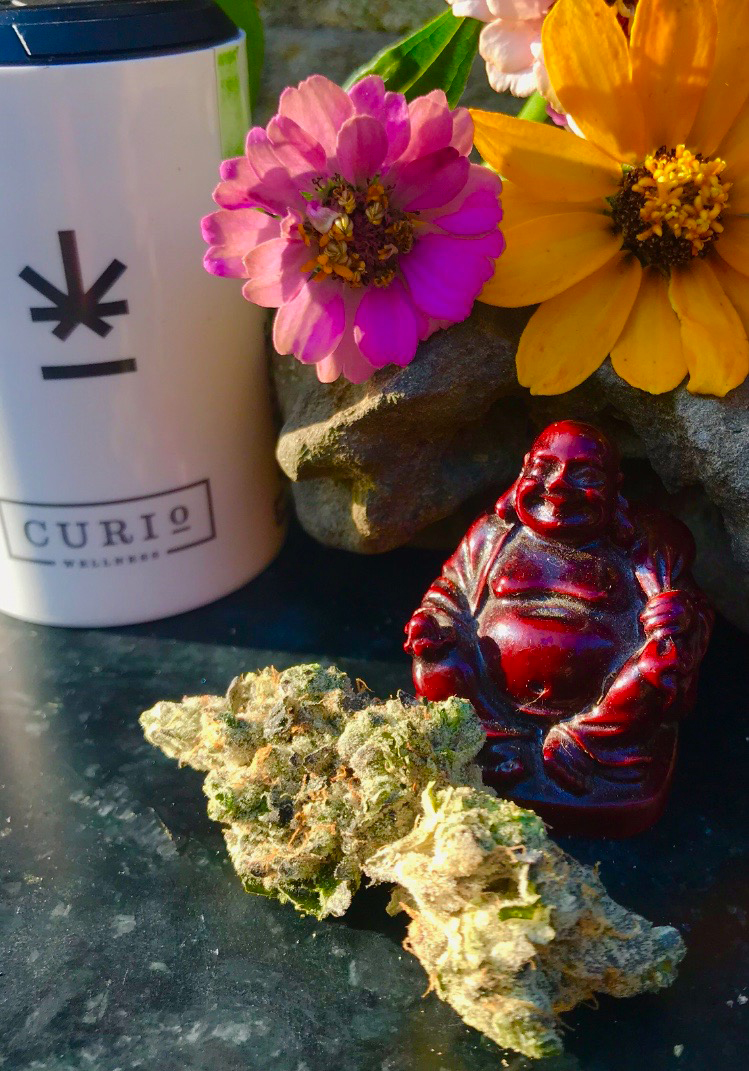 It was just gorgeous, and, I kid you not, something not unlike a stereotypical wizard’s hat.

It was one thick juicy spire with smaller nodules running down the length of the bud which was covered in frosty white crystals.

The buds were brilliantly colored: green, purple, and white.

After the first pull, at relatively low heat (just touched with a lighter and burned like an ember)

I really was able to feel the sativa side of this strain…the wheels were spinning almost immediately after exhale.

Heightened sense of awareness, which seems to come and go as does the indica side of this strain.

The strain’s name seems to describe it physical appearance, but my experience seemed so cerebral at times.  I was outside in a semi-wooded area (I could still hear traffic) but I felt an increased connection with nature.

On a funny note: at one point I was listening to two birds chirp near me and my mind started adding contextual inflection to both of their chirps. It really sounded and felt like they were having a conversation.  It’s not that I wouldn’t notice this chirping any other time, but it was definitely enhanced sonically and I thought about it and focused on it more than I normally would have.

So, I would say some aural stimulation and intensified awareness.

This strain seems to carry equal parts of both sativa and indica in its approach to your system directly after exhale.

The wizard comes to you like an interesting bird you want to follow and lulls you into a nice euphoric feeling soon after.

It also seemed that its effects were felt in soothing waves. The physical was very balanced to the mental with this strain. It seemed emblematic of such an evenly bred hybrid should make you feel.

I’m not used to pre-packs,  but I rather enjoyed this from Curio…the flower anyway…

As for the container, which had a locking mechanism in the plastic cap, dually functioning as an extending handle with a push of your thumb, I was not as impressed.

It seemed to be unnecessary since it really could just pop off locked or unlocked.  But, I do enjoy Curio’s minimalist packaging design.

Either way, it matters what’s inside, and Blissful Wizard by Curio Wellness is a strain I can’t wait to revisit. Pick some up at The Botanist in Ellicott City, MD.

Below are a few links regarding the Blissful Wizard strain:

…and find additional info about this strain here: