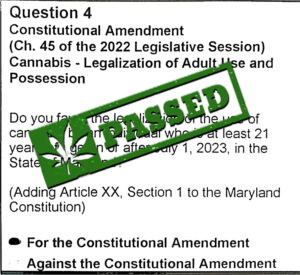 On Nov 08, 2022 Maryland residents voted an overwhelming YES to Proposition 4 or “Prop 4” as it has been called. This amendment to our constitution makes it legal to recreationally possess and consume cannabis.
Maryland is one of 37 states with a medical marijuana program. It has over 100 functioning dispensaries, and the sector generated over $600 million in sales in Maryland last year.
However, whether or not the medicinal industry is permitted to participate might have a significant impact on when recreational cannabis is legally accessible for purchase in the state. Currently a “Medical” state, Maryland passed legal medical cannabis for use by qualified patients in 2013. But, almost immediately after winning the right to alternatively treat medical issues with cannabis, lobbyists, activists, business owners, entrepreneurs, and the public alike began to set their sights on the recreational market. For many of these interested parties, this has been the goal since day one of lobbying for Maryland’s Medical Cannabis status.
Since being narrowly thwarted the previous year, lobbying efforts have increased. Because of this, Prop 4 has gained a huge amount of momentum and press leading up to Tuesday…Early on in the year, well before this past Tuesday, many of us began to wonder what “it” would look like “when” it passed…not “if” it would pass.
It seems to make sense that take a cue from states that have already made recreational cannabis legal. However, I think the best model would be a state that began as a medically legal state and after time and success with the program, voted in legal recreational adult use.
And what does it look like in one of these states? New Jersey may be the best and most recent example of a state’s journey through the prohibition-med-rec cycle of cannabis…one that could be used as blueprint of sorts… After all, it is possible to have both medical and rec in the same state…like we will soon have here in Maryland.
Rather than trading a successful medical cannabis program for a wide open free market, New Jersey opted for a hybridized approach that incentivizes current cannabis patients (card holders) to maintain their license while also opening sales to recreational consumers.
The cannabis could be turned to shatter with the amount of pressure placed on the industry within a “medical” state with strict guidelines, mountains of compliance standards, and a constant reminder to keep the tone clinical and non-commercial.
However with recreational use being legal, those lines will most likely be somewhat blurred as cultivators and producers begin to advertise their goods via billboards, radio, and possibly even tv ads.

New Jersey first made the jump to medical cannabis and just recently went “rec”. They are also, in my opinion, the most recent-best example of how a state should implement and manage a med-rec hybrid cannabis program.
As the patient population is augmented by the recreational population, lines get longer in dispensaries already burdened by product demand;Now, with recreational shoppers crowding once reasonably trafficked showrooms, there is even more stress between supply and demand…well, mostly supply as cultivators struggle to simply grow enough flower. In “single (in) state operators” or “ISO” along with their “multi-state operator” or “MSO” competitors will both need to adjust to the increase in demand for product.

Why Would Anyone Still Become A Patient Instead of a Customer?

… Even with the flood gates opening in July 2023, there are still and most likely, always be incentives for becoming a medical patient and/or maintaining your current medical patient status.
If Maryland’s system is to be anything resembling New Jersey’s then we will probably see price incentives for those with medical patient status; those with medical cards may also have increased or at least greater access to more potent products such as higher milligram edibles which may still be purchased by the rec crowd, but at much higher prices.
It’s also possible that we will see more inventive discounts/specials and points programs access to which may be relegated to those with a medical status in order to help subsidize their healthcare costs; Medical card holders may also potentially experience shorter wait times
Medical patients and recreational customers may not only have different methods of checking in, but they may also have dedicated lanes respectively. It will probably come as no surprise that the recreational customer lines are usually significantly more populated with longer wait times as I understand they can be in NJ. 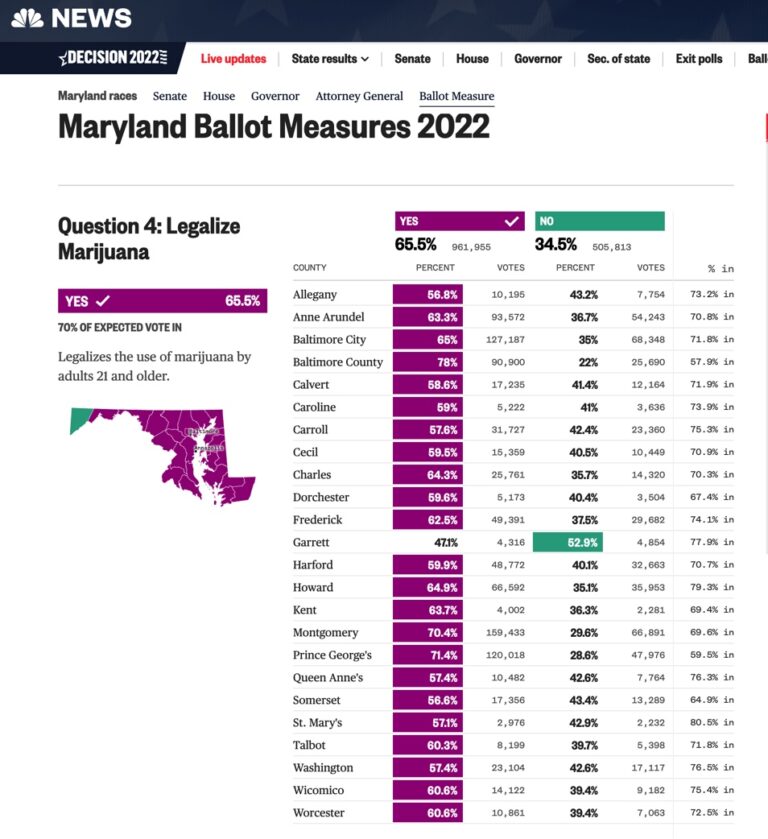 What Does It Actually Mean?

…  On Tuesday, Maryland voters approved a constitutional amendment that will allow adults who have reached the legal age of 21 to legally enjoy cannabis recreationally.

The Associated Press announced the vote at about 9:30 p.m. Tuesday when unofficial election results revealed that legalization had been chosen by over two-thirds of Maryland voters.

According to many sources the passing of Prop 4 does not necessarily mean that every adult who is 21 or older will be able to stroll into their local dispensary and legally purchase cannabis products. Essentially, Prop 4 grants Maryland lawmakers permission to proceed with establishing a recreational sector which may launch as early as July 1,2023.

Homegrown!!! Finally You’ll have a purpose for all those bag seeds

…Prop 4 also includes a provision for Homegrown cannabis and gives Maryland residents of legal age the right to grow their own. Beginning July 1, any adult 21 or older can legally grow up to two cannabis plants at home. As it reads, households will be limited to four total plants, which must be grown securely and out of sight of the public.
And even though Prop 4 passed, none of this can shift to legalized recreational use until July 1, 2023.
And based on my own dealings with the MMCC, it will take at least that much time to implement the appropriate regulations and legislation and resolve objections, any number of which could delay the industry’s recreational debut by months or even years, as happened with the state’s medical cannabis program.
If you recall, despite the fact that the General Assembly approved such a scheme in 2014, delays in rule-making and licensing meant that the first dispensaries did not operate until 2017.

Something to think about…

Not everyone is ecstatic about the legalization referendum.

According to an article published on the Baltmore Sun website (HERE)

Kevin Sabet, a former White House drug policy adviser and co-founder of Smart Approaches to Marijuana, said Tuesday afternoon that he was convinced Maryland voters will support the measure – and then regret it.

“We also don’t want a large new industry following in the footsteps of Big Tobacco.” Sabet stated. “I believe there is a tremendous amount of disinformation and greed around marijuana legalization campaigns, even in Maryland.”

I believe many of the differences will be more subtle and of a more socio-psychological impact may be more felt than measured. For instance, More than likely, and as I’ve seen myself, medical patients have grown accustomed to the amount of personalized attention paid to them. But, in a hybrid med-rec state this may well be considered preferential if not exclusive service that some dispensary owners may use define and differentiate the med patient experience from the rec customer experience. Either way I am interested to see where this takes us. Who knows what types of businesses and other ideas may arise in the wake of this legislation? I am also personally interested and somewhat excited about what it could mean for this site and your humble narrator… More to come as this story evolves…