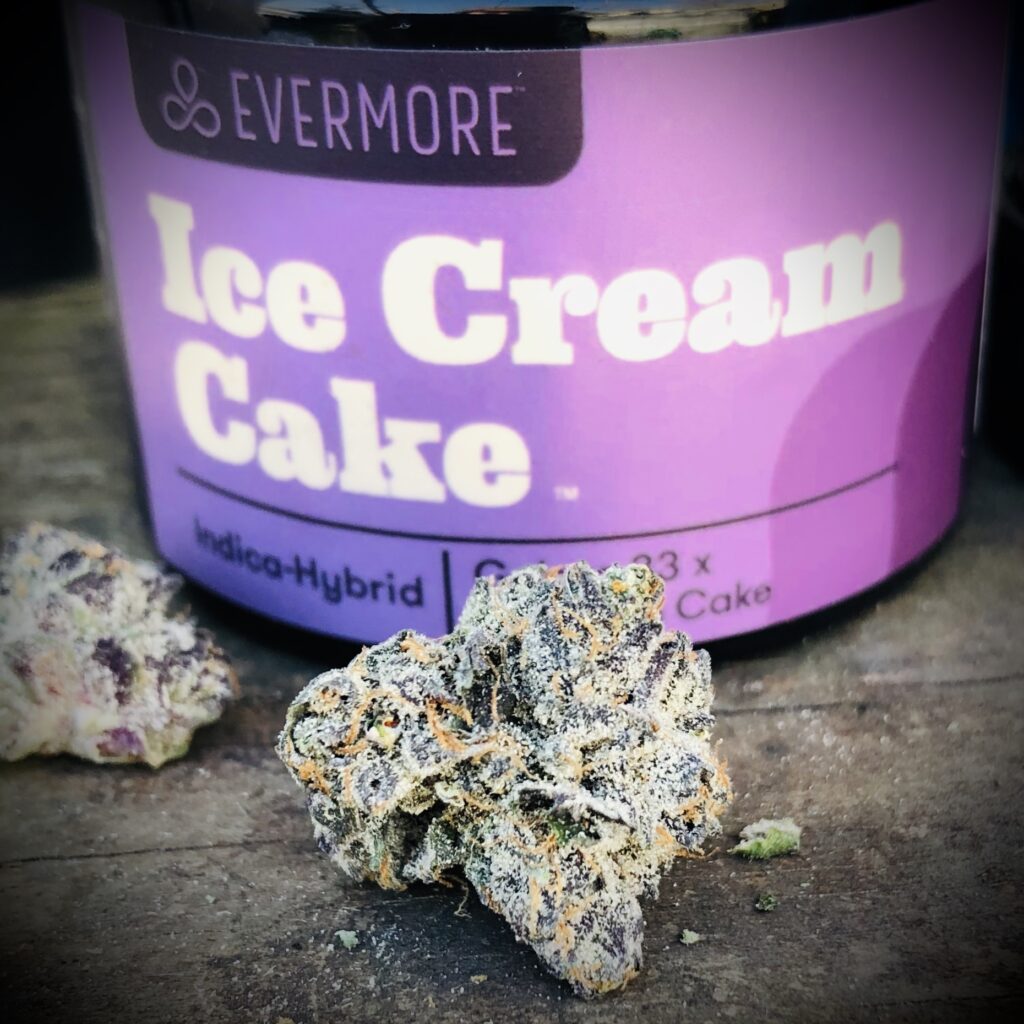 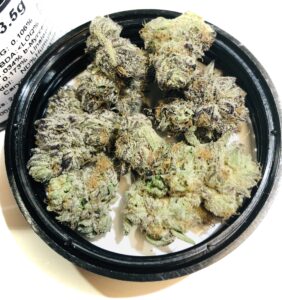 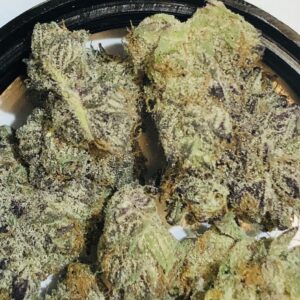 APPEARANCE; No doubt about it Ice Cream Cake by Evermore has to be one The most gorgeous flowers in Maryland.
Buds are medium  sized in this batch, but what beauties they are.
Riddled with purples, greens, and even some white. ICC is ablaze with multiple contrasting colors and a very healthy coating of frosty looking trichomes, which are consistent lustrous milky white.

This batch definitely requires the use of a grinder to break down the rock hard buds. 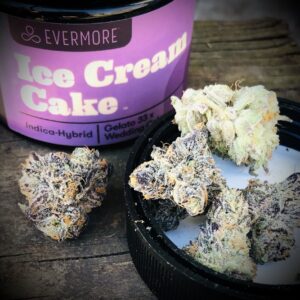 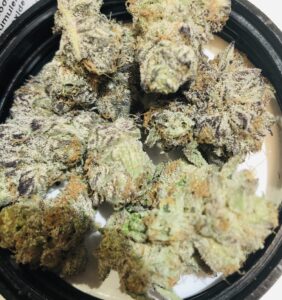 BEST USED:Early Morning/ Morning / Daytime/ Early Evening – this is a great morning micro dosing strain and equally nice in higher doses for afternoon, and/or just winding down after a long day.
The initial mental uplift can be socially stimulating however Ice Cream Cake’s power is in its indica body high- that not only calms nerves thereby providing more patience for stressful events. Ice Cream Cake is sort of an inoculation against stressful situations and events. However, this may be mostly true, after the initial cerebral stimulation is waning. In my estimation, Ice Cream Cake is a good choice for an Indica to micro-dose with in the early morning. 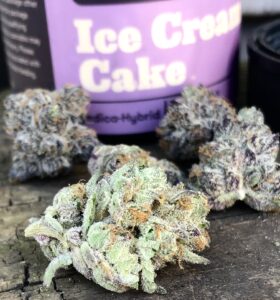 APPLICATIONS (MEDICINAL + RECREATIONAL):
MEDICINAL;*
Could help mitigate or alleviate. some symptoms associated with:

*NOTE: Ice Cream Cake’s greatest medicinal efficacy seems to stem from its ability to relax the body into state of calm so that the mind can also find some temporary respite from symptoms of PTSD, Attention Deficit Disorder, and generalized mental fatigue and/or depression.

A CLOSER LOOK INSIDE (my toke…) 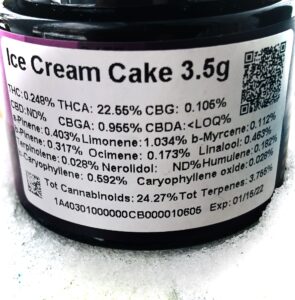 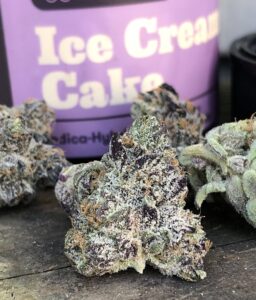 CONCLUSION:
Ice Cream Cake by Evermore is an Indica dominant hybrid marrying the relaxing euphoria of Gelato 33 (typically a 50/50 hybrid) X Wedding Cake, a cross of GSC and Cherry Pie, both with Durban Poison genetics.
While ultimately relaxing and stress relieving, Ice Cream Cake hides a component of initial cerebral stimulation and euphoria courtesy of its Wedding Cake parent’s double Durban Poison genetics, which can inspire creative thought and equip the mind to navigate tasks with focus and intent. 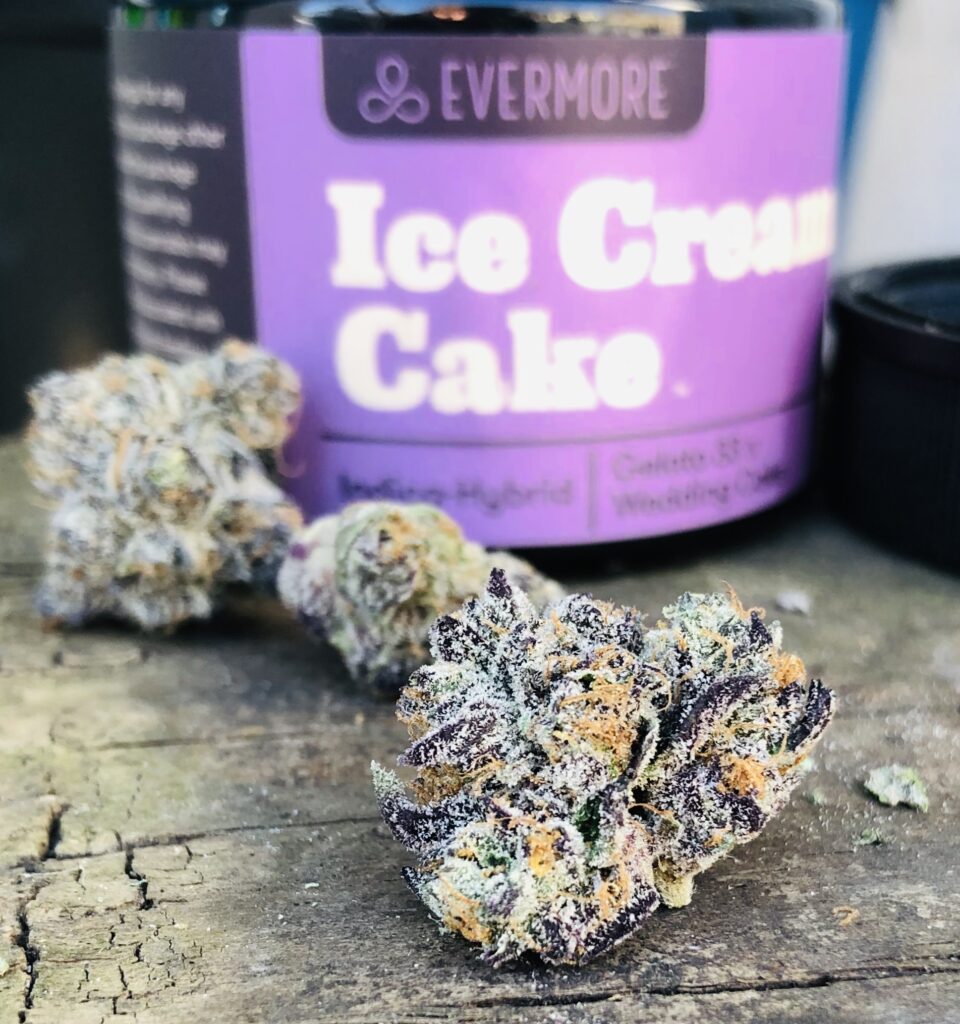 I must admit, at 22% it took your humble narrator at least 3 hard hitting solo sessions and almost a complete eight to really get a handle on what ICC was doing for me or to me. 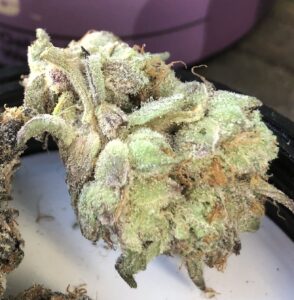 Having experience with only one ICC’s parents Wedding Cake, I figured that I was most likely to pick out the Wedding Cake influence in this strain.

I was able to etch out the Gelato 33 influence though, Bc as I recall Wedding Cake does not have that much consistent physical euphoria onboard. To me, WC and CnC and Cherry Pie are rife with Durban Influence.

Yes, ultimately they are physically euphoric and sedating but there is a considerable amount of cerebral jolt from the Durban. It is more of a progression with the mental effects leading the way for a larger physical euphoria.

With ICC I felt an airy-chest-warming-eyelid swelling – body high almost immediately after exhaling and running along side ICC’s cerebral effects set.

So it was a very nice combo of relaxed and motivated that ran concurrent; the mind reassured in its exploits by the body’s mellow relaxed state. 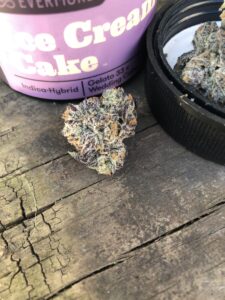